Cold Dark Matter with cosmological constant (ΛCDM) cosmological models with early dark energy (EDE) have been proposed to resolve tensions between the Hubble constant $H_0=100\, h$ km ṡ-1Ṁpc-1 measured locally, giving h ≍ 0.73, and H0 deduced from Planck cosmic microwave background (CMB) and other early-Universe measurements plus ΛCDM, giving h ≍ 0.67. EDE models do this by adding a scalar field that temporarily adds dark energy equal to about 10 per cent of the cosmological energy density at the end of the radiation-dominated era at redshift z ~ 3500. Here, we compare linear and non-linear predictions of a Planck-normalized ΛCDM model including EDE giving h = 0.728 with those of standard Planck-normalized ΛCDM with h = 0.678. We find that non-linear evolution reduces the differences between power spectra of fluctuations at low redshifts. As a result, at z = 0 the halo mass functions on galactic scales are nearly the same, with differences only 1-2 per cent. However, the differences dramatically increase at high redshifts. The EDE model predicts 50 per cent more massive clusters at z = 1 and twice more galaxy-mass haloes at z = 4. Even greater increases in abundances of galaxy-mass haloes at higher redshifts may make it easier to reionize the universe with EDE. Predicted galaxy abundances and clustering will soon be tested by the James Webb Space Telescope (JWST) observations. Positions of baryonic acoustic oscillations (BAOs) and correlation functions differ by about 2 per cent between the models - an effect that is not washed out by non-linearities. Both standard ΛCDM and the EDE model studied here agree well with presently available acoustic-scale observations, but the Dark Energy Spectroscopic Instrument and Euclid measurements will provide stringent new tests. 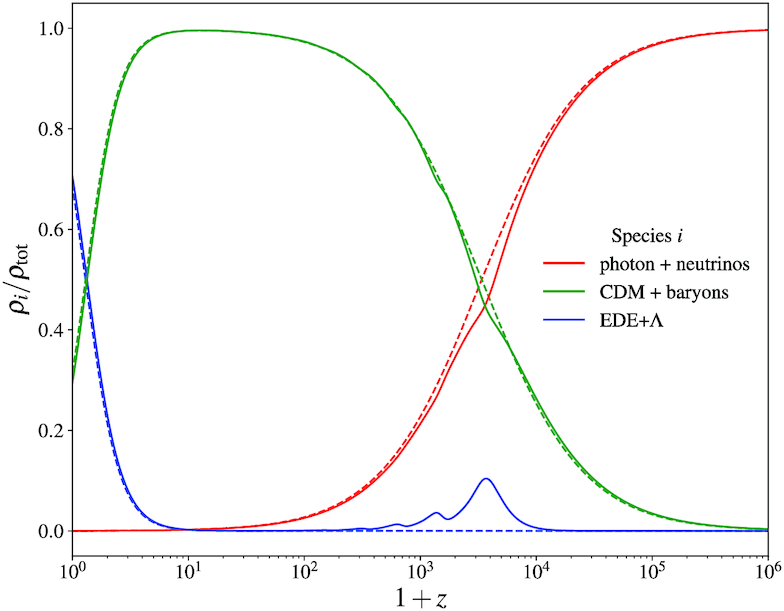