The relation of period spacing (ΔP) versus period (P) of dipole prograde g modes is known to be useful to measure rotation rates in the g-mode cavity of rapidly rotating γ Dor and slowly pulsating B (SPB) stars. In a rapidly rotating star, an inertial mode in the convective core can resonantly couple with g-mode propagative in the surrounding radiative region. The resonant coupling causes a dip in the P - ΔP relation, distinct from the modulations due to the chemical composition gradient. Such a resonance dip in ΔP of prograde dipole g modes appears around a frequency corresponding to a spin parameter 2frot(cc)/νco-rot ∼8-11 with frot(cc) being the rotation frequency of the convective core and νco-rot the pulsation frequency in the co-rotating frame. The spin parameter at the resonance depends somewhat on the extent of core overshooting, central hydrogen abundance, and other stellar parameters. We can fit the period at the observed dip with the prediction from prograde dipole g modes of a main-sequence model, allowing the convective core to rotate differentially from the surrounding g-mode cavity. We have performed such fittings for 16 selected γ Dor stars having well-defined dips, and found that the majority of γ Dor stars we studied rotate nearly uniformly, while convective cores tend to rotate slightly faster than the g-mode cavity in less evolved stars. 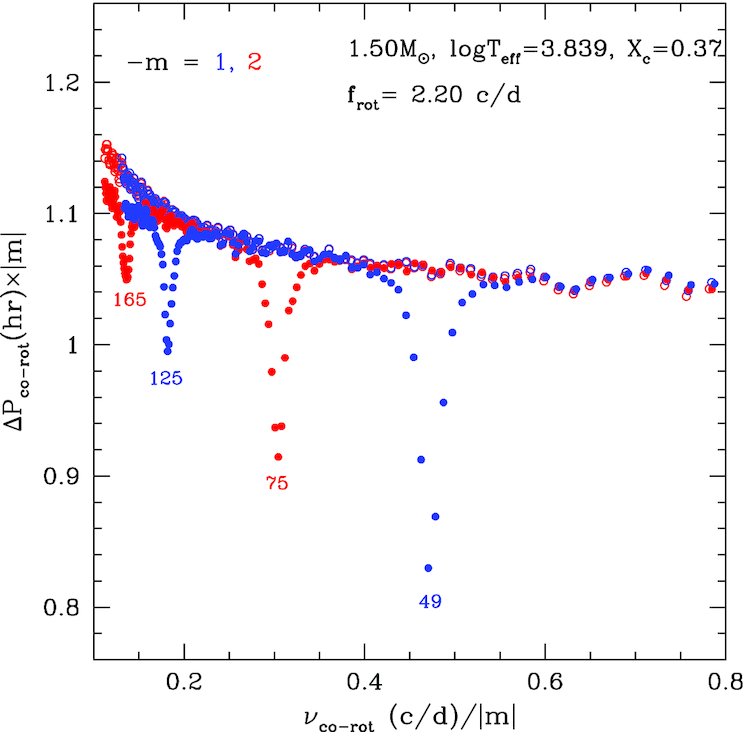