A celestial matryoshka: dynamical and spectroscopic analysis of the Albireo system

We present a spectroscopic characterization and a new orbital solution for the binary system β Cyg Aa/Ac (MCA 55), the primary component ( β Cyg A) of the well-known wide double star Albireo. By matching evolutionary tracks to the physical parameters of all three Albireo stars ( β Cyg Aa, Ac, and B) as obtained from a spectroscopic analysis of TIGRE and IUE spectra, we confirm that they are likely coeval. Our final orbit solution is based on radial-velocity measurements taken over a baseline exceeding 120 yr, combined with relative astrometry from speckle interferometric observations and the absolute astrometry from the Hipparcos and Gaia missions. Our final orbit solution has a period of 121.65 $^{+3.34}_{-2.90}$ yr with an eccentricity of 0.20 $^{+0.01}_{-0.02}$ . Thanks to the inclusion of the absolute astrometry, we find a mass ratio of $q = 1.25^{+0.19}_{-0.17}$ , and a total mass of $9.47_{-3.24}^{+5.88}$ M⊙, indicating that the secondary (Ac) is the more massive of the pair. These results strongly suggest the presence of a fourth, unseen, member of the Albireo system. Given the current photometric data, it is likely that β Cyg A is itself a hierarchical triple. We also derive the systemic proper motion, line-of-sight velocity, and an orbital parallax of the β Cyg A system, allowing us to quantitatively assess the hypothesis that Albireo A and B form a physically bound and genealogically connected system. Finally, we find four potential members of a common proper motion group with Albireo, though none anywhere as close by as the Albireo components A to B. 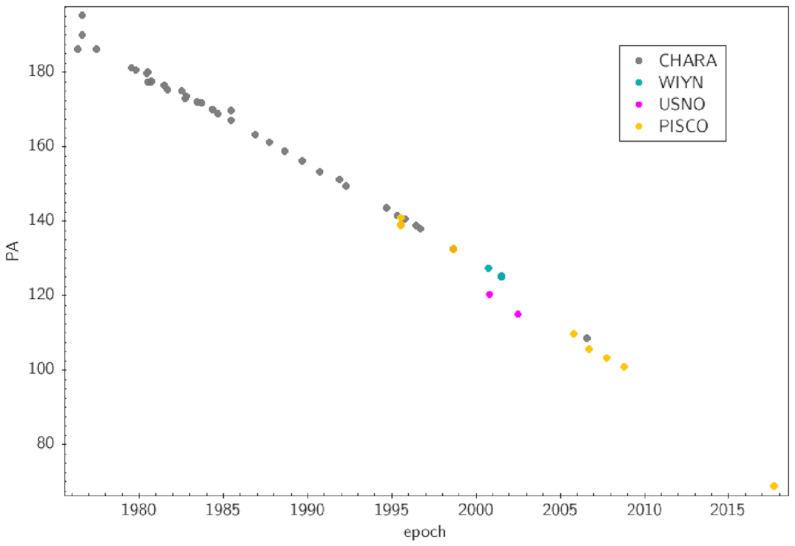