A new channel to form IMBHs throughout cosmic time

While the formation of the first black holes (BHs) at high redshift is reasonably well understood though debated, massive BH formation at later cosmic epochs has not been adequately explored. We present a gas accretion driven mechanism that can build-up BH masses rapidly in dense, gas-rich nuclear star clusters (NSCs). Wind-fed supraexponential accretion in these environments under the assumption of net zero angular momentum for the gas, can lead to extremely rapid growth, scaling stellar mass remnant seed BHs up to the intermediate mass black hole (IMBH) range. This new long-lived channel for IMBH formation permits growth to final masses ranging from 50 to 105 M⊙. Growth is modulated by the gas supply, and premature termination can result in the formation of BHs with masses between 50 and a few 100 M⊙ filling in the so-called mass gap. Typically, growth is unimpeded and will result in the formation of IMBHs with masses ranging from ∼100 to 105 M⊙. New detections from the LIGO-VIRGO source GW190521 to the emerging population of ∼105 M⊙ BHs harboured in low-mass dwarf galaxies are revealing this elusive population. Naturally accounting for the presence of off-centre BHs in low-mass dwarfs, this new pathway also predicts the existence of a population of wandering non-central BHs in more massive galaxies detectable via tidal disruption events and as gravitational wave coalescences. Gas-rich NSCs could therefore serve as incubators for the continual formation of BHs over a wide range in mass throughout cosmic time. 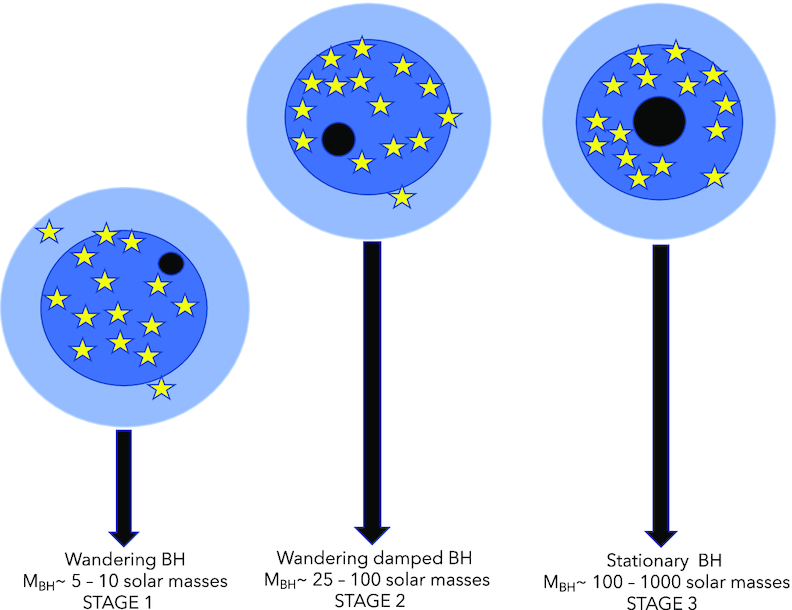