Two long AstroSat Soft X-ray Telescope observations were taken of the third recorded outburst of the symbiotic recurrent nova V3890 Sgr. The first observing run, 8.1-9.9 d after the outburst, initially showed a stable intensity level with a hard X-ray spectrum that we attribute to shocks between the nova ejecta and the pre-existing stellar companion. On day 8.57, the first, weak, signs appeared of supersoft source (SSS) emission powered by residual burning on the surface of the white dwarf. The SSS emission was observed to be highly variable on time-scales of hours. After day 8.9, the SSS component was more stable and brighter. In the second observing run, on days 15.9-19.6 after the outburst, the SSS component was even brighter but still highly variable. The SSS emission was observed to fade significantly during days 16.8-17.8 followed by re-brightening. Meanwhile, the shock component was stable, leading to increase in hardness ratio during the period of fading. AstroSat and XMM-Newton observations have been used to study the spectral properties of V3890 Sgr to draw quantitative conclusions even if their drawback is model dependent. We used the XSPEC to fit spectral models of plasma emission, and the best fits are consistent with the elemental abundances being lower during the second observing run compared to the first for spectra ≥1 keV. The SSS emission is well fitted by non-local thermal equilibrium model atmosphere used for white dwarfs. The resulting spectral parameters, however, are subject to systematic uncertainties such as completeness of atomic data. 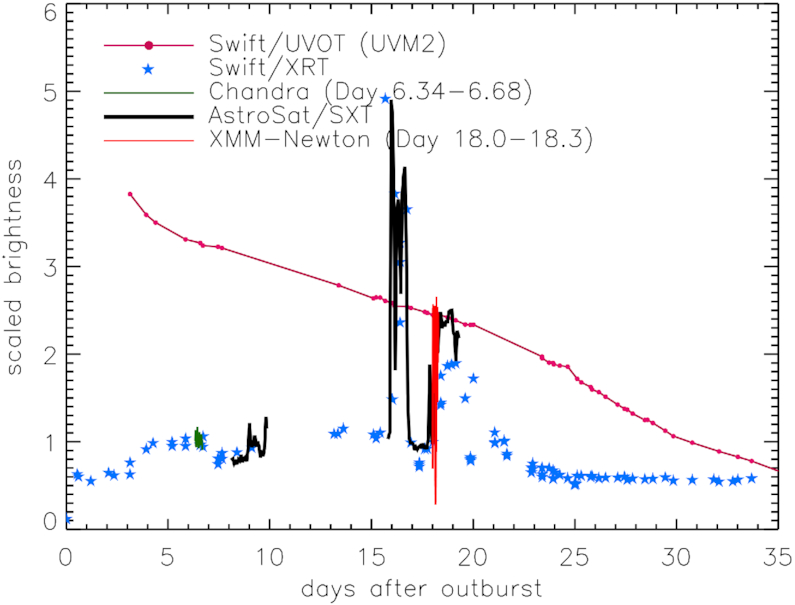