We perform a consistent comparison of the mass and mass profiles of massive (M⋆ > 1011.4 M⊙) central galaxies at z ~ 0.4 from deep Hyper Suprime-Cam (HSC) observations and from the Illustris, TNG100, and Ponos simulations. Weak lensing measurements from HSC enable measurements at fixed halo mass and provide constraints on the strength and impact of feedback at different halo mass scales. We compare the stellar mass function (SMF) and the Stellar-to-Halo Mass Relation (SHMR) at various radii and show that the radius at which the comparison is performed is important. In general, Illustris and TNG100 display steeper values of α where $M_{\star } \propto M_{\rm vir}^{\alpha }$. These differences are more pronounced for Illustris than for TNG100 and in the inner rather than outer regions of galaxies. Differences in the inner regions may suggest that TNG100 is too efficient at quenching in situ star formation at Mvir ≃ 1013 M⊙ but not efficient enough at Mvir ≃ 1014 M⊙. The outer stellar masses are in excellent agreement with our observations at Mvir ≃ 1013 M⊙, but both Illustris and TNG100 display excess outer mass as Mvir ≃ 1014 M⊙ (by ~0.25 and ~0.12 dex, respectively). We argue that reducing stellar growth at early times in $M_\star \sim 10^{9-10} \, \mathrm{M}_{\odot }$ galaxies would help to prevent excess ex-situ growth at this mass scale. The Ponos simulations do not implement AGN feedback and display an excess mass of ~0.5 dex at r < 30 kpc compared to HSC which is indicative of overcooling and excess star formation in the central regions. The comparison of the inner profiles of Ponos and HSC suggests that the physical scale over which the central AGN limits star formation is r ≲ 20 kpc. Joint comparisons between weak lensing and galaxy stellar profiles are a direct test of whether simulations build and deposit galaxy mass in the correct dark matter haloes and thereby provide powerful constraints on the physics of feedback and galaxy growth. Our galaxy and weak lensing profiles are publicly available to facilitate comparisons with other simulations. 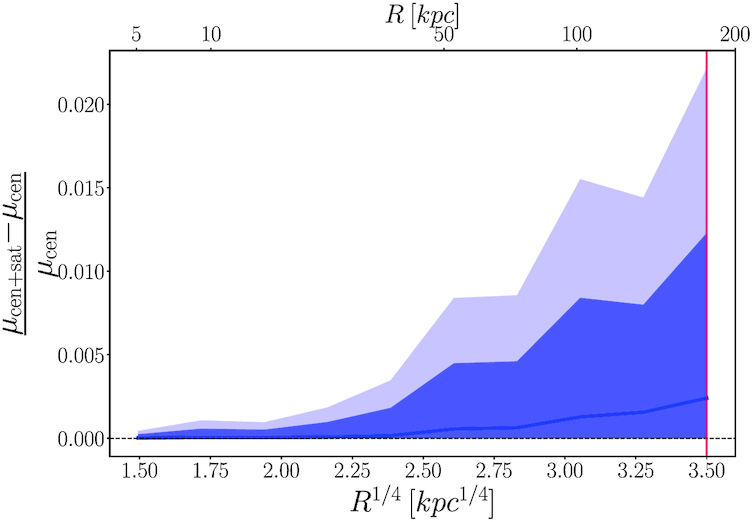