Molecules with ALMA at Planet-forming Scales (MAPS). XII. Inferring the C/O and S/H Ratios in Protoplanetary Disks with Sulfur Molecules

Sulfur-bearing molecules play an important role in prebiotic chemistry and planet habitability. They are also proposed probes of chemical ages, elemental C/O ratio, and grain chemistry processing. Commonly detected in diverse astrophysical objects, including the solar system, their distribution and chemistry remain, however, largely unknown in planet-forming disks. We present CS (2 - 1) observations at ~0"3 resolution performed within the ALMA MAPS Large Program toward the five disks around IM Lup, GM Aur, AS 209, HD 163296, and MWC 480. CS is detected in all five disks, displaying a variety of radial intensity profiles and spatial distributions across the sample, including intriguing apparent azimuthal asymmetries. Transitions of C2S and SO were also serendipitously covered, but only upper limits are found. For MWC 480, we present complementary ALMA observations at ~ 0"5 of CS, 13CS, C34S, H2CS, OCS, and SO2. We find a column density ratio N(H2CS)/N(CS) ~ 2/3, suggesting that a substantial part of the sulfur reservoir in disks is in organic form (i.e., CxHySz). Using astrochemical disk modeling tuned to MWC 480, we demonstrate that N(CS)/N(SO) is a promising probe for the elemental C/O ratio. The comparison with the observations provides a supersolar C/O. We also find a depleted gas-phase S/H ratio, suggesting either that part of the sulfur reservoir is locked in solid phase or that it remains in an unidentified gas-phase reservoir. This paper is part of the MAPS special issue of the Astrophysical Journal Supplement. 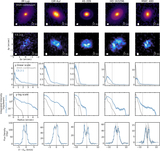