Deuterium fractionation is dependent on various physical and chemical parameters. Thus, the formation location and thermal history of material in the solar system is often studied by measuring its D/H ratio. This requires knowledge about the deuteration processes operating during the planet formation era. We aim to study these processes by radially resolving the DCN/HCN (at 0"3 resolution) and N2D+/N2H+ (~0"3-0"9) column density ratios toward the five protoplanetary disks observed by the Molecules with ALMA at Planet-forming scales (MAPS) Large Program. DCN is detected in all five sources, with one newly reported detection. N2D+ is detected in four sources, two of which are newly reported detections. We derive column density profiles that allow us to study the spatial variation of the DCN/HCN and N2D+/N2H+ ratios at high resolution. DCN/HCN varies considerably for different parts of the disks, ranging from 10-3 to 10-1. In particular, the inner-disk regions generally show significantly lower HCN deuteration compared with the outer disk. In addition, our analysis confirms that two deuterium fractionation channels are active, which can alter the D/H ratio within the pool of organic molecules. N2D+ is found in the cold outer regions beyond ~50 au, with N2D+/N2H+ ranging between 10-2 and 1 across the disk sample. This is consistent with the theoretical expectation that N2H+ deuteration proceeds via the low-temperature channel only. This paper is part of the MAPS special issue of the Astrophysical Journal Supplement. 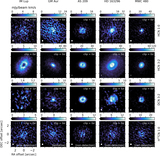