Several thousand core-collapse supernovae (CCSNe) of different flavors have been discovered so far. However, identifying their progenitors has remained an outstanding open question in astrophysics. Studies of SN host galaxies have proven to be powerful in providing constraints on the progenitor populations. In this paper, we present all CCSNe detected between 2009 and 2017 by the Palomar Transient Factory. This sample includes 888 SNe of 12 distinct classes out to redshift z ≍ 1. We present the photometric properties of their host galaxies from the far-ultraviolet to the mid-infrared and model the host-galaxy spectral energy distributions to derive physical properties. The galaxy mass function of Type Ic, Ib, IIb, II, and IIn SNe ranges from 105 to 1011.5 M⊙, probing the entire mass range of star-forming galaxies down to the least-massive star-forming galaxies known. Moreover, the galaxy mass distributions are consistent with models of star-formation-weighted mass functions. Regular CCSNe are hence direct tracers of star formation. Small but notable differences exist between some of the SN classes. Type Ib/c SNe prefer galaxies with slightly higher masses (i.e., higher metallicities) and star formation rates than Type IIb and II SNe. These differences are less pronounced than previously thought. H-poor superluminous supernovae (SLSNe) and SNe Ic-BL are scarce in galaxies above 1010 M⊙. Their progenitors require environments with metallicities of < 0.4 and < 1 solar, respectively. In addition, the hosts of H-poor SLSNe are dominated by a younger stellar population than all other classes of CCSNe. Our findings corroborate the notion that low metallicity and young age play an important role in the formation of SLSN progenitors. 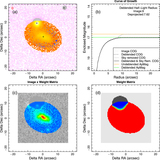