We present a major update to the 3D coronal rope ejection (3DCORE) technique for modeling coronal mass ejection flux ropes in conjunction with an approximate Bayesian computation (ABC) algorithm that is used for fitting the model to in situ magnetic field measurements. The model assumes an empirically motivated torus-like flux rope structure that expands self-similarly within the heliosphere, is influenced by a simplified interaction with the solar wind environment, and carries along an embedded analytical magnetic field. The improved 3DCORE implementation allows us to generate extremely large ensemble simulations that we then use to find global best-fit model parameters using an ABC sequential Monte Carlo algorithm. The usage of this algorithm, under some basic assumptions on the uncertainty of the magnetic field measurements, allows us to furthermore generate estimates on the uncertainty of model parameters using only a single in situ observation. We apply our model to synthetically generated measurements to prove the validity of our implementation for the fitting procedure. We also present a brief analysis, within the scope of our model, of an event captured by the Parker Solar Probe shortly after its first flyby of the Sun on 2018 November 12 at 0.25 au. The presented toolset is also easily extendable to the analysis of events captured by multiple spacecraft and will therefore facilitate future multipoint studies. 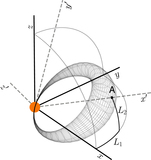