Galactic bars are frequent in disk galaxies and they may support the transfer of matter toward the central engine of active nuclei. The barred galaxy NGC 1097 has magnetic forces controlling the gas flow at several kpc scales, which suggest that magnetic fields (B-fields) are dynamically important along the bar and nuclear ring. However, the effect of the B-field on the gas flows in the central kpc scale has not been characterized. Using thermal polarized emission at 89 μm with HAWC+/SOFIA, here, we measure that the polarized flux is spatially located at the contact regions of the outer bar with the starburst ring. The linear polarization decomposition analysis shows that the 89 μm and radio (3.5 and 6.2 cm) polarization traces two different modes, m, of the B-field: a constant B-field orientation and dominated by m = 0 at 89 μm, and a spiral B-field dominated by m = 2 at radio. We show that the B-field at 89 μm is concentrated in the warmest region of a shock driven by the galactic-bar dynamics in the contact regions between the outer bar with the starburst ring. Radio polarization traces a superposition of the spiral B-field outside and within the starburst ring. According to Faraday rotation measures between 3.5 and 6.2 cm, the radial component of the B-field along the contact regions points toward the galaxy's center on both sides. We conclude that gas streams outside and within the starburst ring follow the B-field, which feeds the black hole with matter from the host galaxy. *The SOFIA Legacy Program for Magnetic Fields in Galaxies provides a software repository at https://github.com/galmagfields/hawc and publicly available data at http://galmagfields.com/. 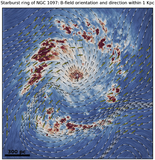