Stellar streams are excellent probes of the underlying gravitational potential in which they evolve. In this work, we fit dynamical models to five streams in the Southern Galactic hemisphere, combining observations from the Southern Stellar Stream Spectroscopic Survey (S 5), Gaia EDR3, and the Dark Energy Survey, to measure the mass of the Large Magellanic Cloud (LMC). With an ensemble of streams, we find a mass of the LMC ranging from ~14-19 × 1010 M ⊙, probed over a range of closest approach times and distances. With the most constraining stream (Orphan-Chenab), we measure an LMC mass of ${18.8}_{-4.0}^{+3.5}\times {10}^{10}\,{M}_{\odot }$ , probed at a closest approach time of 310 Myr and a closest approach distance of 25.4 kpc. This mass is compatible with previous measurements, showing that a consistent picture is emerging of the LMC's influence on structures in the Milky Way. Using this sample of streams, we find that the LMC's effect depends on the relative orientation of the stream and LMC at their point of closest approach. To better understand this, we present a simple model based on the impulse approximation and we show that the LMC's effect depends both on the magnitude of the velocity kick imparted to the stream and the direction of this kick. 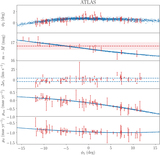