On the Co-orbitation of Satellite Galaxies along the Great Plane of Andromeda: NGC 147, NGC 185, and Expectations from Cosmological Simulations

Half of the satellite galaxies of Andromeda form a narrow plane termed the Great Plane of Andromeda (GPoA), and their line-of-sight velocities display a correlation reminiscent of a rotating structure. Recently reported first proper-motion measurements for the on-plane satellites NGC 147 and NGC 185 indicate that they indeed co-orbit along the GPoA. This provides a novel opportunity to compare the M31 satellite system to ΛCDM expectations. We perform the first detailed comparison of the orbital alignment of two satellite galaxies beyond the Milky Way with several hydrodynamical and dark-matter-only cosmological simulations (Illustris TNG50, TNG100, ELVIS, and PhatELVIS) in the context of the Planes of Satellite Galaxies Problem. In line with previous works, we find that the spatial flattening and line-of-sight velocity correlation are already in substantial tension with ΛCDM, with none of the simulated analogs simultaneously reproducing both parameters. Almost none (3%-4%) of the simulated systems contain two satellites with orbital poles as well aligned with their satellite plane as indicated by the most likely proper motions of NGC 147 and NGC 185. However, within current measurement uncertainties, it is common (≈70%) that the two best-aligned satellites of simulated systems are consistent with the orbital alignment. Yet, the chance that any two simulated on-plane satellites have as well-aligned orbital poles as observed is low (≈4%). We conclude that confirmation of the tight orbital alignment for these two objects via improved measurements, or the discovery of similar alignments for additional GPoA members, holds the potential to further raise the tension with ΛCDM expectations. 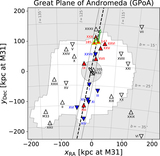