HESS J0632+057 belongs to a rare subclass of binary systems that emit gamma rays above 100 GeV. It stands out for its distinctive high-energy light curve, which features a sharp "primary" peak and broader "secondary" peak. We present the results of contemporaneous observations by NuSTAR and VERITAS during the secondary peak between 2019 December and 2020 February, when the orbital phase (ϕ) is between 0.55 and 0.75. NuSTAR detected X-ray spectral evolution, while VERITAS detected TeV emission. We fit a leptonic wind-collision model to the multiwavelength spectra data obtained over the four NuSTAR and VERITAS observations, constraining the pulsar spin-down luminosity and the magnetization parameter at the shock. Despite long-term monitoring of the source from 2019 October to 2020 March, the MDM observatory did not detect significant variation in Hα and Hβ line equivalent widths, an expected signature of Be-disk interaction with the pulsar. Furthermore, fitting folded Swift-XRT light-curve data with an intrabinary shock model constrained the orbital parameters, suggesting two orbital phases (at ϕ D = 0.13 and 0.37), where the pulsar crosses the Be-disk, as well as phases for the periastron (ϕ 0 = 0.30) and inferior conjunction (ϕ IFC = 0.75). The broadband X-ray spectra with Swift-XRT and NuSTAR allowed us to measure a higher neutral hydrogen column density at one of the predicted disk-passing phases. 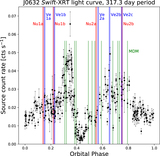