Despite the many successes that modern massive star evolutionary theory has enjoyed, reproducing the apparent trend in the relative number of red supergiants (RSGs) and Wolf-Rayet (WR) stars has remained elusive. Previous estimates show the RSG/WR ratio decreasing strongly with increasing metallicity. However, the evolutionary models have always predicted a relatively flat distribution for the RSG/WR ratio. In this paper we reexamine this issue, drawing on recent surveys for RSGs and WRs in the Magellanic Clouds, M31, and M33. The RSG surveys have used Gaia astrometry to eliminate foreground contamination and have separated RSGs from asymptotic giant branch stars using near-infrared colors. The surveys for WRs have utilized interference-filter imaging, photometry, and image subtraction techniques to identify candidates, which have then been confirmed spectroscopically. After carefully matching the observational criteria to the models, we now find good agreement in both the single-star Geneva and binary BPASS models with the new observations. The agreement is better when we shift the RSG effective temperatures derived from J - Ks photometry downwards by 200 K in order to agree with the Levesque TiO effective temperature scale. In an appendix we also present a source list of RSGs for the SMC which includes effective temperatures and luminosities derived from near-infrared 2MASS photometry, in the same manner as used for the other galaxies. 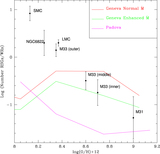