A numerical detection of the mass-dependent spin transition of the galaxies is presented. Analyzing a sample of the galaxies with stellar masses in the range of 109 < (M⋆/M⊙) ≤ 1011 from the IllustrisTNG300-1 simulations, we explore the alignment tendency between the galaxy baryon spins and the three eigenvectors of the linearly reconstructed tidal field as a function of M⋆ and its evolution in the redshift range of 0 ≤ z ≤ 1.5. Detecting a significant signal of the occurrence of the mass-dependent transition of the galaxy spins, we show that the centrals differ from the satellites in their spin transition type. As M⋆ increases beyond a certain threshold mass, the preferred directions of the central galaxy spins transit from the minor to the intermediate tidal eigenvectors (type two) at z = 0.5 and 1, while those of the satellites transit from the minor to the major tidal eigenvectors (type one) at z = 1 and 1.5. It is also shown that the mass range and type of the spin transition depend on the galaxy morphology, the degree of the alignments between the baryon and total spin vectors, and the environmental density. Meanwhile, the stellar spins of the galaxies are found to yield a weak signal of the T1 transitions at z = 0, whose strength and trend depend on the degree of the alignments between the stellar and baryon spins. The possible mechanisms responsible for the T1 and T2 spin transitions are discussed. 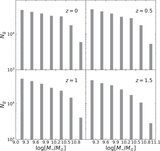