The presence of a large-scale surface magnetic field in early-type stars leads to several unique electromagnetic phenomena producing radiation over X-ray to radio bands. Among them, the rarest type of emission is electron cyclotron maser emission (ECME) observed as periodic, circularly polarized radio pulses. The phenomenon was first discovered in the hot magnetic star CU Vir. Past observations of this star led to the consensus that the star produces only right circularly polarized ECME, suggesting that only one magnetic hemisphere takes part in the phenomenon. Here we present the first ultra-wideband (0.4-4 GHz) study of this star using the upgraded Giant Metrewave Radio telescope and the Karl G. Jansky Very Large Array, which led to the surprising discovery of ECME of both circular polarizations up to around 1.5 GHz. The GHz observations also allowed us to infer that the upper ECME cutoff frequency is at ≳5 GHz. The sub-GHz observation led to the unexpected observation of more than two pairs of ECME pulses per rotation cycle. In addition, we report the discovery of a "giant pulse" and transient enhancements, which are potentially the first observational evidence of "centrifugal breakout" of plasma from the innermost part of the stellar magnetosphere. The stark contrast between the star's behavior at GHz and sub-GHz frequencies could either be due to propagation effects, a manifestation of varying magnetic field topology as a function of height, or a signature of an additional "ECME engine." 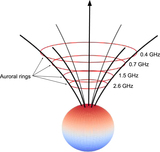