Galactic supernova remnants (SNRs) with angular dimensions greater than a few degrees are relatively rare, as are remnants located more than 10° off the Galactic plane. Here we report a UV and optical investigation of two previously suspected SNRs more than 10° in both angular diameter and Galactic latitude. One is a proposed remnant discovered in 2008 through 1420 MHz polarization maps near Galactic coordinates l = 353°, b = -34°. GALEX far-UV (FUV) and Hα emission mosaics show the object's radio emission coincident with an 11° × 14° shell of UV filaments that surrounds a diffuse Hα emission ring. Another proposed high-latitude SNR is the 20° × 26° Antlia nebula (G275.5+18.4) discovered in 2002 through low-resolution all-sky Hα and ROSAT soft X-ray emissions. GALEX FUV and Hα mosaics along with optical spectra indicate the presence of shocks throughout the Antlia nebula with estimated shock velocities of 70 to over 100 km s-1. We also present evidence that it has collided with the NE rim of the Gum Nebula. We find both of these large nebulae are bona fide SNRs with ages less than 105 yr despite their unusually large angular dimensions. We also present FUV and optical images along with optical spectra of a new high-latitude SNR (G249.7+24.7) some 4.5° in diameter which has also been independently discovered in X-rays and radio (Becker at al. 2021). We find this remnant's distance to be ≤400 pc based on the detection of red and blue Na I absorption features in the spectra of two background stars. 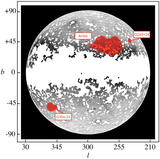