Dynamical Evolution of an Active-region Filament Driven by Magnetic Reconnection

Studying solar filament dynamical evolutions is an important approach to reveal the driving mechanism of solar eruptions, which seriously impact on the Sun-Earth system and could cause disastrous space weather. To better understand the evolution process of solar filaments, here we investigate an active-region filament by employing observations from the New Vacuum Solar Telescope (NVST), Solar Dynamics Observatory, and Interface Region Imaging Spectrograph. The high-resolution NVST Hα images show that the northern footpoint of the filament gradually moved northward. Near the northern footpoint, there is an arch filament system (AFS). Between adjacent footpoints of the filament and the AFS, transient brightening, underlying magnetic cancellation, and bidirectional flows were detected, which jointly imply that it could be the magnetic reconnection between the filament and the AFS that changes the connection of filament threads and drives its footpoint to move northward. In addition, during the footpoint evolution, the filament with highly twisted structure underwent several untwisting motions. Meanwhile, transient brightenings were also observed and appeared as bright knots around several positions where filament threads might braid with each other. And some bright blobs were also detected to propagate outward from the brightening region. These observations suggest that magnetic reconnection might be responsible for the untwisting motion. This work exposes us to a dynamical scenario of the filament evolution driven by magnetic reconnection, which will promote our understanding of the formation and eruption of the filaments. 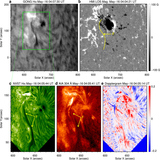