We derive abundance ratios for nine stars in the relatively high-metallicity bulge globular cluster NGC 6380. We find a mean cluster metallicity between [Fe/H] = -0.80 and -0.73, with no clear evidence for a variation in iron abundances beyond the observational errors. Stars with strongly enhanced [N/Fe] abundance ratios populate the cluster and are anticorrelated with [C/Fe], trends that are considered a signal of the multiple-population phenomenon in this cluster. We detect an apparent intrinsic star-to-star spread (≳0.27 dex) in the slow neutron-capture process element (s-element) Ce II. Moreover, the [Ce/Fe] abundance ratio exhibits a likely correlation with [N/Fe], and a somewhat weaker correlation with [Al/Fe]. If confirmed, NGC 6380 could be the first high-metallicity globular cluster where a N-Ce correlation is detected. Furthermore, this correlation suggests that Ce may also be an element involved in the multiple-population phenomenon. Currently, a consensus interpretation for the origin of the this apparent N-Ce correlation in high-metallicity clusters is lacking. We tentatively suggest that it could be reproduced by different channels-low-mass asymptotic giant branch stars in the high-metallicity regime or fast-rotating massive stars ("spinstars"), due to the rotational mixing. It may also be the cumulative effect of several pollution events including the occurrence of peculiar stars. Our findings should guide stellar nucleosynthesis models, in order to understand the reasons for its apparent exclusivity in relatively high-metallicity globular clusters. 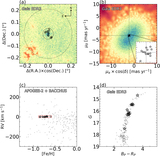