We present a new method to extract statistical constraints on the progenitor properties and formation channels of individual gravitational-wave sources. Although many different models have been proposed to explain the binary black holes detected by the LIGO Scientific and Virgo Collaboration (LVC), formation through isolated binary evolution remains the best-explored channel. Under the assumption of formation through binary evolution, we use the statistical wrapper Dart_board coupled with the rapid binary evolution code COSMIC to model the progenitor of GW150914, the first gravitational-wave signal detected by the LVC. Our Bayesian method combines the likelihood generated from the gravitational-wave signal with a prior describing the population of stellar binaries and the universes star formation and metallicity evolution. We find that the dominant evolutionary channel for GW150914 did not involve a common-envelope phase, but instead the system most probably (7090) formed through stable mass transfer. This result is robust against variations of various model parameters, and it is reversed only when dynamical instability in binaries becomes more likely when a strict condition favoring common envelopes is adopted. Our analysis additionally provides a quantitative description of the progenitors relevant to each channel. 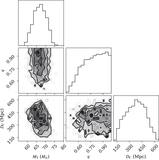