We calculate models of stellar evolution for very massive stars and include the effects of modified gravity to investigate the influence on the physical properties of blue supergiant stars and their use as extragalactic distance indicators. With shielding and fifth force parameters in a similar range as those in previous studies of Cepheid and tip of the red giant branch (TRGB) stars, we find clear effects on stellar luminosity and flux-weighted gravity. The relationship between flux-weighted gravity, gF ≡ g/ ${T}_{\mathrm{eff}}^{4}$ , and bolometric magnitude Mbol, which has been used successfully for accurate distance determinations, is systematically affected. While the stellar evolution of flux-weighted gravity-luminosity relationships (FGLRs) show a systematic offset from the observed relation, we can use the differential shifts between models with Newtonian and modified gravity to estimate the influence on FGLR distance determinations. Modified gravity leads to an increase in distance of 0.05-0.15 magnitudes in distance modulus. These changes are comparable to the ones found for Cepheid stars. We compare observed FGLR and TRGB distances of nine galaxies to constrain the free parameters of modified gravity. Not accounting for systematic differences between TRGB and FGLR distances shielding parameters of 5 × 10-7 and 10-6 and fifth force parameters of 1/3 and 1 can be ruled out with about 90% confidence. Allowing for potential systematic offsets between TRGB and FGLR distances no determination is possible for a shielding parameter of 10-6. For 5 × 10-7 a fifth force parameter of 1 can be ruled out to 92% but 1/3 is unlikely only to 60%. 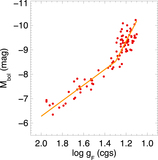