We report novel observational evidence on the evolutionary status of lithium-rich giant stars by combining asteroseismic and lithium abundance data. Comparing observations and models of the asteroseismic gravity-mode period spacing ΔΠ1, we find that super-Li-rich giants (SLRs, A(Li) > 3.2 dex) are almost exclusively young red-clump (RC) stars. Depending on the exact phase of evolution, which requires more data to refine, SLR stars are either (i) less than ∼2 Myr or (ii) less than ∼40 Myr past the main core helium flash (CHeF). Our observations set a strong upper limit for the time of the inferred Li-enrichment phase of <40 Myr post-CHeF, lending support to the idea that lithium is produced around the time of the CHeF. In contrast, the more evolved RC stars (>40 Myr post-CHeF) generally have low lithium abundances (A(Li) <1.0 dex). Between the young, super-Li-rich phase, and the mostly old, Li-poor RC phase, there is an average reduction of lithium by about 3 orders of magnitude. This Li destruction may occur rapidly. We find the situation to be less clear with stars having Li abundances between the two extremes of super-Li-rich and Li-poor. This group, the "Li-rich" stars (3.2 > A(Li) > 1.0 dex), shows a wide range of evolutionary states. 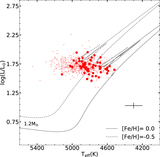