With the onset of solar maximum and the expected increased prevalence of interplanetary shock waves, Parker Solar Probe is likely to observe numerous shocks in the next few years. An outstanding question that has received surprisingly little attention has been how turbulence interacts with collisionless shock waves. Turbulence in the supersonic solar wind is described frequently as a superposition of a majority 2D and a minority slab component. We formulate a collisional perpendicular shock-turbulence transmission problem in a way that enables investigation of the interaction and transmission of quasi-perpendicular fluctuations such as magnetic flux ropes/islands and vortices as well as entropy and acoustic modes in the large plasma beta regime. We focus on the transmission of an upstream spectrum of these modes, finding that the downstream spectral amplitude is typically increased significantly (a factor of 10 or more), and that the upstream spectral index of the inertial range, and indeed the general spectral shape, is unchanged for the downstream magnetic variance, kinetic energy, and density variance. A comparison of the theoretically predicted downstream magnetic variance, kinetic energy, and density variance spectra with those observed at 1, 5, and 84 au by Wind, Ulysses, and Voyager 2 shows excellent agreement. The overall theoretically predicted characteristics of the transmission of turbulence across shocks observed in the solar wind appear to be largely consistent with recent observational studies by Pitňa et al. and Borovsky. 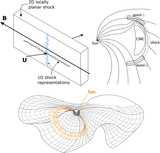