The Merger Dynamics of the Galaxy Cluster A1775: New Insights from Chandra and XMM-Newton for a Cluster Simultaneously Hosting a Wide-angle Tail and a Narrow-angle Tail Radio Source

We present a new study of the merger dynamics of A1775 by analyzing the high-quality Chandra and XMM-Newton archival data. We confirm/identify an arc-shaped edge (i.e., the head) at ∼48 kpc west of the X-ray peak, a split cold gas tail that extends eastward to ∼163 kpc, and a plume of spiral-like X-ray excess (within about 81-324 kpc northeast of the cluster core) that connects to the end of the tail. The head, across which the projected gas temperature rises outward from ${3.39}_{-0.18}^{+0.28}$ to ${5.30}_{-0.43}^{+0.54}$ keV, is found to be a cold front with a Mach number of ${ \mathcal M }\sim 0.79$ . Along the surfaces of the cold front and tail, typical Kelvin-Helmholtz instability features (noses and wings, etc.) are found and are used to constrain the upper limit of the magnetic field (∼11.2 μG) and the viscosity suppression factor (∼0.01). Combining optical and radio evidence, we propose a two-body merger (instead of systematic motion in a large-scale gas environment) scenario and have carried out idealized hydrodynamic simulations to verify it. We find that the observed X-ray emission and temperature distributions can be best reproduced with a merger mass ratio of 5 after the first pericentric passage. The NAT radio galaxy is thus more likely to be a single galaxy falling into the cluster center at a relative velocity of 2800 km s-1, a speed constrained by its radio morphology. The infalling subcluster is expected to have a relatively low gas content, because only a gas-poor subcluster can cause central-only disturbances as observed in such an off-axis merger. 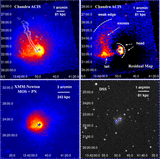