Detached circumplanetary disks are unstable to tilting as a result of the stellar tidal potential. We examine how a tilted circumplanetary disk affects the evolution of the spin axis of an oblate planet. The disk is evolved using time-dependent equations for linear wave-like warp evolution, including terms representing the effect of the tidal potential and planetary oblateness. For a disk with a sufficiently large mass, we find that the planet spin quickly aligns to the misaligned disk. The tilt of the planetary spin axis then increases on the same timescale as the disk. This can be an efficient mechanism for generating primordial obliquity in giant planets. We suggest that directly imaged exoplanets at large orbital radii, where the disk mass criterion is more likely to be satisfied, could have significant obliquities due to the tilt instability of their circumplanetary disks. 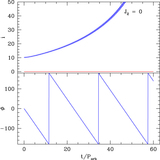