High time-resolution solar wind magnetic field data are employed to study statistics describing intermittency near the first perihelion (∼35.6 R⊙) of the Parker Solar Probe mission. A merged data set employing two instruments on the FIELDS suite enables broadband estimation of higher-order moments of magnetic field increments, with five orders established with reliable accuracy. The duration, cadence, and low noise level of the data permit evaluation of scale dependence of the observed intermittency from the inertial range to deep subproton scales. The results support multifractal scaling in the inertial range, and monofractal but non-Gaussian scaling in the subproton range, thus clarifying suggestions based on data near Earth that had remained ambiguous due to possible interference of the terrestrial foreshock. The physics of the transition to monofractality remains unclear but we suggest that it is due to a scale-invariant population of current sheets between ion and electron inertial scales; the previous suggestion of incoherent kinetic-scale wave activity is disfavored as it presumably leads re-Gaussianization that is not observed. 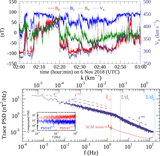