M-stars are the most common hosts of planetary systems in the Galaxy. Protoplanetary disks around M-stars thus offer a prime opportunity to study the chemistry of planet-forming environments. We present an Atacama Large Millimeter/submillimeter Array survey of molecular line emission toward a sample of five protoplanetary disks around M4-M5 stars (FP Tau, J0432+1827, J1100-7619, J1545-3417, and Sz 69). These observations can resolve chemical structures down to tens of astronomical units. Molecular lines of 12CO, 13CO, C18O, C2H, and HCN are detected toward all five disks. Lines of H2CO and DCN are detected toward 2/5 and 1/5 disks, respectively. For disks with resolved C18O, C2H, HCN, and H2CO emission, we observe substructures similar to those previously found in disks around solar-type stars (e.g., rings, holes, and plateaus). C2H and HCN excitation conditions estimated interior to the pebble disk edge for the bright disk J1100-7619 are consistent with previous measurements around solar-type stars. The correlation previously found between C2H and HCN fluxes for solar-type disks extends to our M4-M5 disk sample, but the typical C2H/HCN ratio is higher for the M4-M5 disk sample. This latter finding is reminiscent of the hydrocarbon enhancements found by previous observational infrared surveys in the innermost (<10 au) regions of M-star disks, which is intriguing since our disk-averaged fluxes are heavily influenced by flux levels in the outermost disk, exterior to the pebble disk edge. Overall, most of the observable chemistry at 10-100 au appears similar for solar-type and M4-M5 disks, but hydrocarbons may be more abundant around the cooler stars. 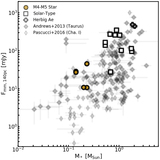