From Formation to Disruption: Observing the Multiphase Evolution of a Solar Flare Current Sheet

A current sheet, where magnetic energy is liberated through reconnection and converted to other forms, is thought to play the central role in solar flares, the most intense explosions in the heliosphere. However, the evolution of a current sheet and its subsequent role in flare-related phenomena such as particle acceleration is poorly understood. Here we report observations obtained with NASA's Solar Dynamics Observatory that reveal a multiphase evolution of a current sheet in the early stages of a solar flare, from its formation to quasi-stable evolution and disruption. Our observations have implications for the understanding of the onset and evolution of reconnection in the early stages of eruptive solar flares. 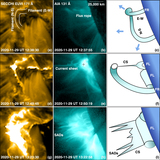