The Carina Nebula and Gum 31 Molecular Complex. III. The Distribution of the 1-3 GHz Radio Continuum across the Whole Nebula

We report the most detailed 1-3 GHz radio continuum emission map of the nearest region of massive-star formation, the Carina Nebula. As part of a large program with the Australia Telescope Compact Array, we have covered ∼12 deg2, achieving an angular resolution of ∼16″, representing the largest and most complete map of the radio continuum to date. Our continuum map shows a spectacular and complex distribution of emission across the nebula, with multiple structures such as filaments, shells, and fronts across a wide range of size scales. The ionization fronts have advanced far into the southern and northern region of the Galactic plane, as fronts are clearly detected at distances of ∼80 pc from the stellar clusters in the center. We estimated an ionization photon luminosity QH = (7. 8 ± 0.8) × 1050 s-1, which corresponds to ∼85% of the total value obtained from stellar population studies. Thus, approximately 15% of the ionizing flux has escaped from the nebula into the diffuse Galactic interstellar medium. Comparison between radio continuum and the hydrogen atomic and molecular gas maps offers a clear view of the bipolar outflow driven by the energy released by the massive stellar clusters that also affects the fraction of molecular gas across the nebula. Comparison between 8 μm and 70 μm emission maps and the radio continuum reveals how the hot gas permeates through the molecular cloud; shapes the material into features such as pillars, small shells, and arc-like structures; and ultimately escapes. 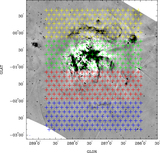