In this era of Gaia and ALMA, dynamical stellar mass measurements, derived from spatially and spectrally resolved observations of the Keplerian rotation of circumstellar disks, provide benchmarks that are independent of observations of stellar characteristics and their uncertainties. These benchmarks can then be used to validate and improve stellar evolutionary models, the latter of which can lead to both imprecise and inaccurate mass predictions for pre-main-sequence, low-mass (≤0.5 M⊙) stars. We present the dynamical stellar masses derived from disks around three M stars (FP Tau, J0432+1827, and J1100-7619) using ALMA observations of 12CO (J = 2-1) and 13CO (J = 2-1) emission. These are the first dynamical stellar mass measurements for J0432+1827 and J1100-7619 (0.192 ± 0.005 M⊙ and 0.461 ± 0.057 M⊙, respectively) and the most precise measurement for FP Tau (0.395 ± 0.012 M⊙). Fiducial stellar evolutionary model tracks, which do not include any treatment of magnetic activity, agree with the dynamical stellar mass measurement of J0432+1827 but underpredict the mass by ∼60% for FP Tau and by ∼80% for J1100-7619. Possible explanations for the underpredictions include inaccurate assumptions of stellar effective temperature, undetected binarity for J1100-7619, and that fiducial stellar evolutionary models are not complex enough to represent these stars. In the former case, the stellar effective temperatures would need to be increased by amounts ranging from ∼40 to ∼340 K to reconcile the fiducial stellar evolutionary model predictions with the dynamically measured masses. In the latter case, we show that the dynamical masses can be reproduced using results from stellar evolutionary models with starspots, which incorporate fractional starspot coverage to represent the manifestation of magnetic activity. Folding in low-mass M stars from the literature and assuming that the stellar effective temperatures are imprecise but accurate, we find tentative evidence of a relationship between fractional starspot coverage and observed effective temperature for these young, cool stars. 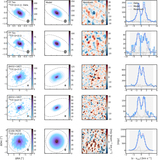