Shock parameters at Earth's bow shock in rare instances can approach the Mach numbers predicted at supernova remnants. We present our analysis of a high Alfvén Mach number (MA = 27) shock utilizing multipoint measurements from the Magnetospheric Multiscale spacecraft during a crossing of Earth's quasi-perpendicular bow shock. We find that the shock dynamics are mostly driven by reflected ions, perturbations that they generate, and nonlinear amplification of the perturbations. Our analyses show that reflected ions create modest magnetic enhancements upstream of the shock, which evolve in a nonlinear manner as they traverse the shock foot. They can transform into proto-shocks that propagate at small angles to the magnetic field and toward the bow shock. The nonstationary bow shock shows signatures of both reformation and surface ripples. Our observations indicate that although shock reformation occurs, the main shock layer never disappears. These observations are at high plasma β, a parameter regime that has not been well explored by numerical models. 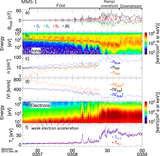