We carried out a systematic study of full-orbit phase curves for known transiting systems in the northern ecliptic sky that were observed during Year 2 of the TESS primary mission. We applied the same methodology for target selection, data processing, and light-curve fitting as we did in our Year 1 study. Out of the 15 transiting systems selected for analysis, seven-HAT-P-7, KELT-1, KELT-9, KELT-16, KELT-20, Kepler-13A, and WASP-12-show statistically significant secondary eclipses and day-night atmospheric brightness modulations. Small eastward dayside hot-spot offsets were measured for KELT-9b and WASP-12b. KELT-1, Kepler-13A, and WASP-12 show additional phase-curve variability attributed to the tidal distortion of the host star; the amplitudes of these signals are consistent with theoretical predictions. We combined occultation measurements from TESS and Spitzer to compute dayside brightness temperatures, TESS-band geometric albedos, Bond albedos, and phase integrals for several systems. The new albedo values solidify the previously reported trend between dayside temperature and geometric albedo for planets with 1500 K < Tday < 3000 K. For Kepler-13Ab, we carried out an atmospheric retrieval of the full secondary eclipse spectrum, which revealed a noninverted temperature-pressure profile, significant H2O and K absorption in the near-infrared, evidence for strong optical atmospheric opacity due to sodium, and a confirmation of the high geometric albedo inferred from our simpler analysis. We explore the implications of the phase integrals (ratios of Bond to geometric albedos) for understanding exoplanet clouds. We also report updated transit ephemerides for all of the systems studied in this work. 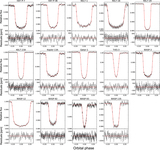