We present Keck/NIRC2 adaptive optics imaging of planetary microlensing event MOA-2007-BLG-400 that resolves the lens star system from the source. We find that the MOA-2007-BLG-400L planetary system consists of a 1.71 ± 0.27MJup planet orbiting a 0.69 ± 0.04M⊙ K-dwarf host star at a distance of 6.89 ± 0.77 kpc from the Sun. So, this planetary system probably resides in the Galactic bulge. The planet-host star projected separation is only weakly constrained due to the close-wide light-curve degeneracy; the 2σ projected separation ranges are 0.6-1.0 au and 4.7-7.7 au for close and wide solutions, respectively. This host mass is at the top end of the range of masses predicted by a standard Bayesian analysis. Our Keck follow-up program has now measured lens-source separations for six planetary microlensing events, and five of these six events have host star masses above the median prediction under the assumption that assumes that all stars have an equal chance of hosting planets detectable by microlensing. This suggests that more massive stars may be more likely to host planets of a fixed mass ratio that orbit near or beyond the snow line. These results also indicate the importance of host star mass measurements for exoplanets found by microlensing. The microlensing survey imaging data from NASA's Nancy Grace Roman Space Telescope (formerly WFIRST) mission will be doing mass measurements like this for a huge number of planetary events. 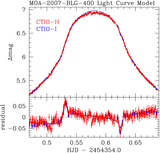