We analyze the very short Einstein timescale (tE ≃ 7 hr) event KMT-2019-BLG-2073. Making use of the pronounced finite-source effects generated by the clump giant source, we measure the Einstein radius θE ≃ 4.8 μas and so infer a mass $M=59\,{M}_{\oplus }{({\pi }_{\mathrm{rel}}/16\mu \mathrm{as})}^{-1}$ , where πrel is the lens-source relative parallax. We find no significant evidence for a host of this planetary-mass object, though one could be present at sufficiently wide separation. If so, it would be detectable after about 10 yr. This is the fourth isolated microlens with a measured Einstein radius θE < 10 μas, which we argue is a useful threshold for a "likely free-floating planet (FFP)" candidate. We outline a new approach to constructing a homogeneous sample of giant-star finite-source/point-lens (FSPL) events, within which the subsample of FFP candidates can be statistically analyzed. We illustrate this approach using 2019 KMTNet data and show that there appears to be a large θE gap between the two FFP candidates and the 11 other FSPL events. We argue that such sharp features are more identifiable in a sample selected on θE compared to the traditional approach of identifying candidates based on short tE. 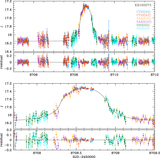