Many astrophysical phenomena are time-varying, in the sense that their intensity, energy spectrum, and/or the spatial distribution of the emission suddenly change. This paper develops a method for modeling a time series of images. Under the assumption that the arrival times of the photons follow a Poisson process, the data are binned into 4D grids of voxels (time, energy band, and x-y coordinates), and viewed as a time series of non-homogeneous Poisson images. The method assumes that at each time point, the corresponding multiband image stack is an unknown 3D piecewise constant function including Poisson noise. It also assumes that all image stacks between any two adjacent change points (in time domain) share the same unknown piecewise constant function. The proposed method is designed to estimate the number and the locations of all of the change points (in time domain), as well as all of the unknown piecewise constant functions between any pairs of the change points. The method applies the minimum description length principle to perform this task. A practical algorithm is also developed to solve the corresponding complicated optimization problem. Simulation experiments and applications to real data sets show that the proposed method enjoys very promising empirical properties. Applications to two real data sets, the XMM observation of a flaring star and an emerging solar coronal loop, illustrate the usage of the proposed method and the scientific insight gained from it. 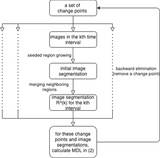