The precise parallax, proper motion, and photometric measurements contained in Gaia Data Release 2 (DR2) offer the opportunity to reexamine the membership and ages of nearby young moving groups (NYMGs), i.e., loose groups of stars of age ≲100 Myr in the solar vicinity. Here, we analyze the available DR2 data for members and candidate members of the ɛ Cha Association (ɛCA) which, at an estimated age of ∼3-5 Myr, has previously been identified as among the youngest NYMGs. The several dozen confirmed members of ɛCA include MP Mus and T Cha, two of the nearest stars of roughly solar mass that are known to host primordial protoplanetary disks, and the Herbig Ae/Be star HD 104237A. We have used Gaia DR2 data to ascertain the Galactic positions and kinematics and color-magnitude diagram positions of ɛCA members and candidates so as to reassess their membership status and thereby refine estimates of the distance, age, multiplicity, and disk fraction of the group. Our analysis yields 36 bona fide ɛCA members, as well as 20 provisional members, including 3 new members identified here as comoving companions to previously known ɛCA stars. We determine a mean distance to ɛCA of 101.0 ± 4.6 pc and confirm that, at an age of ${5}_{-2}^{+3}$ Myr, ɛCA represents the youngest stellar group within ∼100 pc of Earth. We identify several new photometric binary candidates, bringing the overall multiplicity fraction (MF) of ɛCA to 40%, intermediate between the MFs of young T associations and the field. 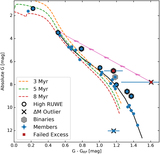