It has been known for a decade that hot stars with hot Jupiters tend to have high obliquities. Less is known about the degree of spin-orbit alignment for hot stars with other kinds of planets. Here, we reassess the obliquities of hot Kepler stars with transiting planets smaller than Neptune, based on spectroscopic measurements of their projected rotation velocities ( $v\sin i$ ). The basis of the method is that a lower obliquity—all other things being equal—causes $\sin i$ to be closer to unity and increases the value of $v\sin i$ . We sought evidence for this effect using a sample of 150 Kepler stars with effective temperatures between 5950 and 6550 K and a control sample of 101 stars with matching spectroscopic properties and random orientations. The planet hosts have systematically higher values of $v\sin i$ than the control stars, but not by enough to be compatible with perfect spin-orbit alignment. The mean value of $\sin i$ is 0.856 ± 0.036, which is 4σ away from unity (perfect alignment), and 2σ away from $\pi /4$ (random orientations). There is also evidence that the hottest stars have a broader obliquity distribution: when modeled separately, the stars cooler than 6250 K have $ \langle \sin i \rangle =0.928\pm 0.042$ while the hotter stars are consistent with random orientations. This is similar to the pattern previously noted for stars with hot Jupiters. Based on these results, obliquity excitation for early-G and late-F stars appears to be a general outcome of star and planet formation, rather than being exclusively linked to hot Jupiter formation. * The data presented herein were obtained at the W. M. Keck Observatory, which is operated as a scientific partnership among the California Institute of Technology, the University of California, and the National Aeronautics and Space Administration. The Observatory was made possible by the generous financial support of the W. M. Keck Foundation. 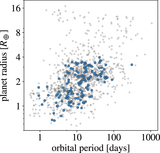