On the Diversity of Asymmetries in Gapped Protoplanetary Disks

Protoplanetary disks with large inner dust cavities are thought to host massive planetary or substellar companions. These disks show asymmetries and rings in the millimeter continuum caused by dust trapping in pressure bumps and potentially vortices or horseshoes. The origin of the asymmetries and their diversity remains unclear. We present a comprehensive study of 16 disks for which the gas surface density profile has been constrained by CO isotopologue data. First, we compare the azimuthal extents of the dust continuum profiles with the local gas surface density in each disk and find that the asymmetries correspond to higher Stokes numbers or low gas surface density. We discuss which asymmetric structures can be explained by a horseshoe, a vortex, or spiral density waves. Second, we reassess the gas gap radii from the 13CO maps, which are about a factor of 2 smaller than the dust ring radii, suggesting that the companions in these disks are in the brown dwarf (∼15-50 MJup) or super-Jovian (∼3-15 MJup) mass regime on eccentric orbits. This is consistent with the estimates from contrast curves on companion mass limits. These curves rule out (sub)stellar companions (q > 0.05) for the majority of the sample at the gap location, but it remains possible at even smaller radii. Third, we find that spiral arms in scattered-light images are primarily detected around high-luminosity stars with disks with wide gaps, which can be understood by the dependence of the spiral arm pitch angle on disk temperature and companion mass. 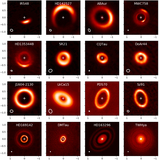