Planets around young stars trace the early evolution of planetary systems. We report the discovery and validation of two planetary systems with ages ≲300 Myr from observations by the Transiting Exoplanet Survey Satellite (TESS). The $40\mbox{--}320$ Myr old G star TOI-251 hosts a ${2.74}_{-0.18}^{+0.18}\,{R}_{\oplus }$ mini-Neptune with a $4.94$ day period. The $20\mbox{--}160$ Myr old K star TOI-942 hosts a system of inflated Neptune-sized planets, with TOI-942b orbiting in a period of $4.32$ days with a radius of ${4.81}_{-0.20}^{+0.20}\,{R}_{\oplus }$ and TOI-942c orbiting in a period of $10.16$ days with a radius of ${5.79}_{-0.18}^{+0.19}\,{R}_{\oplus }$ . Though we cannot place either host star into a known stellar association or cluster, we can estimate their ages via their photometric and spectroscopic properties. Both stars exhibit significant photometric variability due to spot modulation, with measured rotation periods of ∼3.5 days. These stars also exhibit significant chromospheric activity, with age estimates from the chromospheric calcium emission lines and X-ray fluxes matching that estimated from gyrochronology. Both stars also exhibit significant lithium absorption, similar in equivalent width to well-characterized young cluster members. TESS has the potential to deliver a population of young planet-bearing field stars, contributing significantly to tracing the properties of planets as a function of their age. 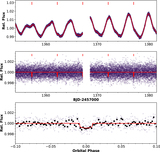