Context. Thanks to ongoing efforts to compute accurate stellar ages, we are able to characterise stars in different regions of the Milky Way. The Gaia and Kepler space-missions, along with ground-based spectroscopic surveys such as APOGEE, provide a unique way to study the chemo-kinematics relations as a function of age through the Galactic stellar populations and provide new constraints to Galactic evolution models.
Aims: We investigate the properties of the double sequences of the Milky Way discs visible in the [α/Fe] versus [Fe/H] diagram, which are usually associated to the chemical thin and thick discs at the solar circle. In the framework of Galactic formation and evolution, we discuss the complex relationships between age, metallicity, [α/Fe], and the radial, azimuthal, and vertical components of the space velocities.
Methods: We study stars with measured chemical and seismic properties from the APOGEE spectroscopic survey and the Kepler satellite, respectively. In addition, astrometry from the Gaia satellite is available for the majority of the sample. We separate the [α/Fe]−[Fe/H] diagram into three stellar populations: the thin disc, the high-α metal-poor thick disc, and the high-α metal-rich thick disc and characterise each of these in the age-chemo-kinematics parameter space. Because of the model-dependent nature of the ages inferred from asteroseismology, and because they depend on the quality of the input spectroscopic information, we compare results obtained from different APOGEE data releases (DR14 and DR16). We also use age determinations from two recent works in the literature. In addition, we use the Besançon stellar populations synthesis model to highlight selection biases and mechanisms (such as mergers and secular evolution) not included in the model.
Results: The thin disc exhibits a flat age-metallicity relation while [α/Fe] increases with stellar age. We confirm no correlation between radial and vertical velocities with [Fe/H], [α/Fe], and age for each stellar population. Considering both samples, Vφ decreases with age for the thin disc, while Vφ increases with age for the high-α metal-poor thick disc. We show that this difference is not due to sample selection. Although the age distribution of the high-α metal-rich thick disc is very close to that of the high-α metal-poor thick disc between 7 and 14 Gyr, its kinematics seems to follow that of the thin disc. This feature, not predicted by the hypotheses included in the Besançon Galaxy Model, suggests a different origin and history for this population. Finally, we show that there is a maximum dispersion of the vertical velocity, σZ, with age for the high-α metal-poor thick disc around 8 Gyr. The comparisons with the Besançon Galaxy Model simulations suggest a more complex chemo-dynamical scheme to explain this feature, most likely including mergers and radial migration effects. 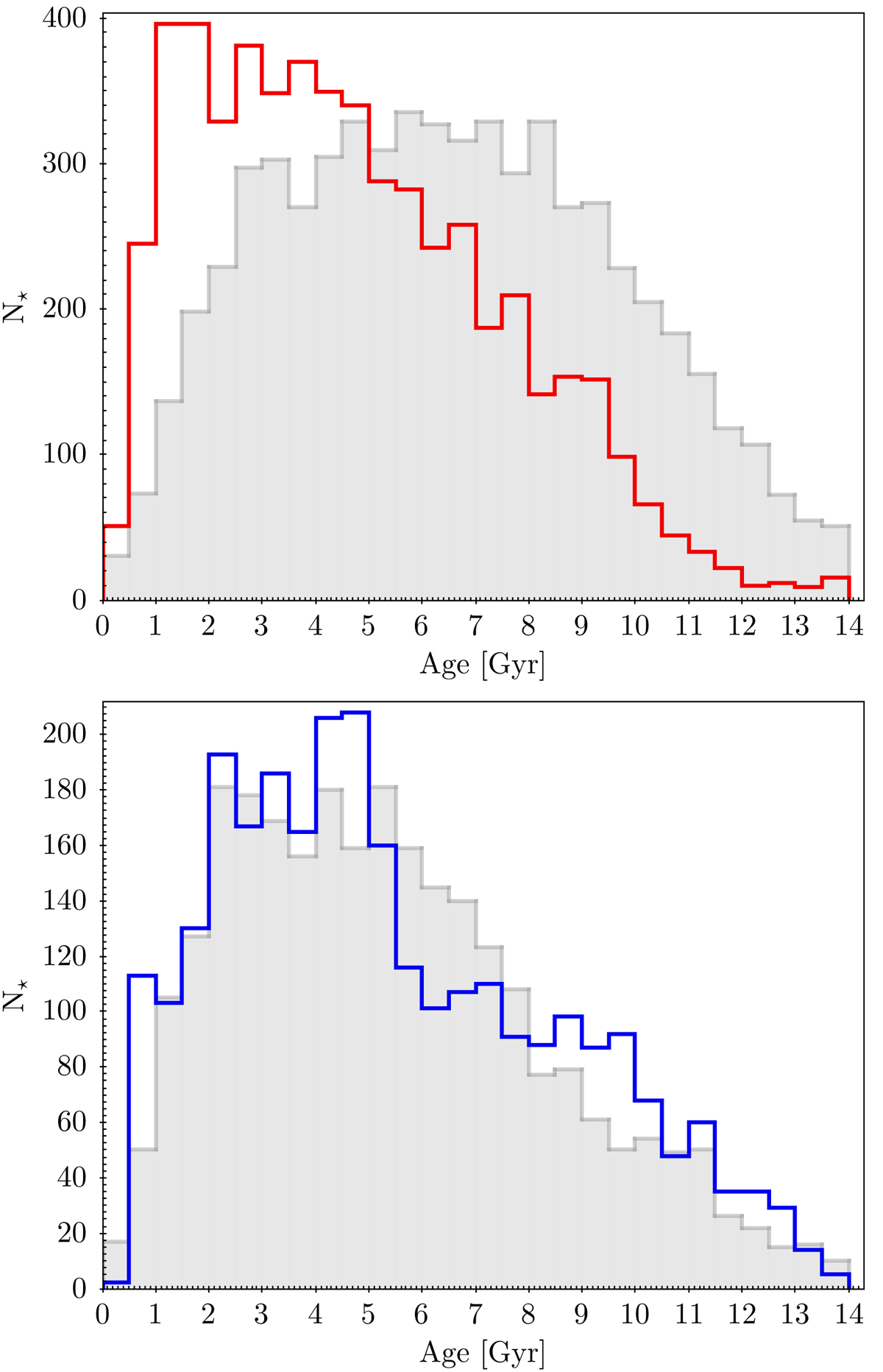