Context. As material from an infalling protostellar envelope hits the forming disk, an accretion shock may develop which could (partially) alter the envelope material entering the disk. Observations with the Atacama Large Millimeter/submillimeter Array (ALMA) indicate that emission originating from warm SO and SO2 might be good tracers of such accretion shocks.
Aims: The goal of this work is to test under what shock conditions the abundances of gas-phase SO and SO2 increase in an accretion shock at the disk-envelope interface.
Methods: Detailed shock models including gas dynamics were computed using the Paris-Durham shock code for nonmagnetized J-type accretion shocks in typical inner envelope conditions. The effect of the preshock density, shock velocity, and strength of the ultraviolet (UV) radiation field on the abundance of warm SO and SO2 is explored. Compared with outflows, these shocks involve higher densities (~107 cm−3), lower shock velocities (~few km s−1), and large dust grains (~0.2 μm) and thus probe a different parameter space.
Results: Warm gas-phase chemistry is efficient in forming SO under most J-type shock conditions considered. In lower-velocity (~3 km s−1) shocks, the abundance of SO is increased through subsequent reactions starting from thermally desorbed CH4 toward H2CO and finally SO. In higher velocity (≳4 km s−1) shocks, both SO and SO2 are formed through reactions of OH and atomic S. The strength of the UV radiation field is crucial for SO and in particular SO2 formation through the photodissociation of H2O. Thermal desorption of SO and SO2 ice is only relevant in high-velocity (≳5 km s−1) shocks at high densities (≳107 cm−3). Both the composition in the gas phase, in particular the abundances of atomic S and O, and in ices such as H2S, CH4, SO, and SO2 play a key role in the abundances of SO and SO2 that are reached in the shock.
Conclusions: Warm emission from SO and SO2 is a possible tracer of accretion shocks at the disk-envelope interface as long as a local UV field is present. Observations with ALMA at high-angular resolution could provide further constraints given that other key species for the gas-phase formation of SO and SO2, such as H2S and H2CO, are also covered. Moreover, the James Webb Space Telescope will give access to other possible slow, dense shock tracers such as H2, H2O, and [S I] 25 μm. 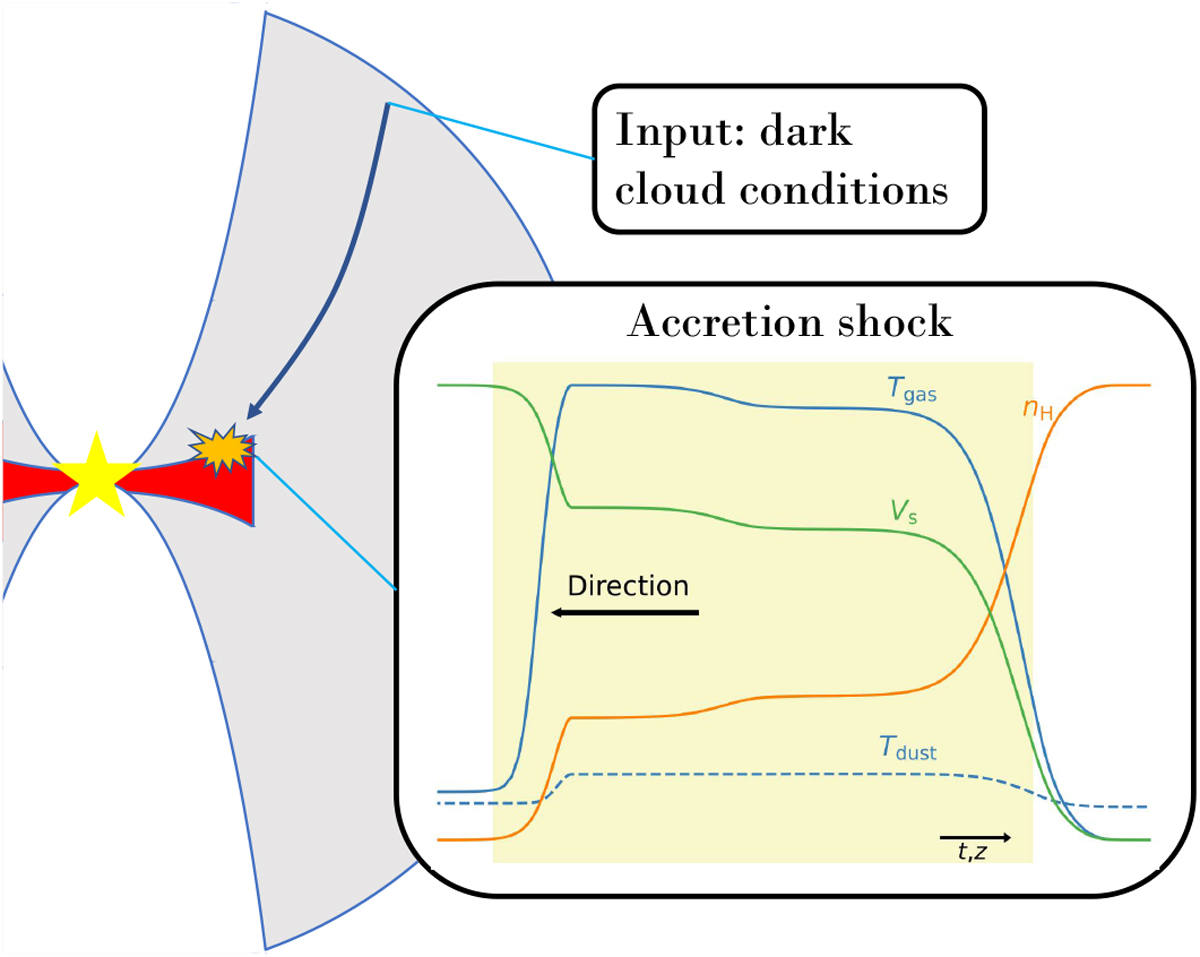