Context. Galaxy clusters are an important tool for cosmology, and their detection and characterization are key goals for current and future surveys. Using data from the Wide-field Infrared Survey Explorer (WISE), the Massive and Distant Clusters of WISE Survey (MaDCoWS) located 2839 significant galaxy overdensities at redshifts 0.7 ≲ z ≲ 1.5, which included extensive follow-up imaging from the Spitzer Space Telescope to determine cluster richnesses. Concurrently, the Atacama Cosmology Telescope (ACT) has produced large area millimeter-wave maps in three frequency bands along with a large catalog of Sunyaev-Zeldovich (SZ)-selected clusters as part of its Data Release 5 (DR5).
Aims: We aim to verify and characterize MaDCoWS clusters using measurements of, or limits on, their thermal SZ effect signatures. We also use these detections to establish the scaling relation between SZ mass and the MaDCoWS-defined richness.
Methods: Using the maps and cluster catalog from DR5, we explore the scaling between SZ mass and cluster richness. We do this by comparing cataloged detections and extracting individual and stacked SZ signals from the MaDCoWS cluster locations. We use complementary radio survey data from the Very Large Array, submillimeter data from Herschel, and ACT 224 GHz data to assess the impact of contaminating sources on the SZ signals from both ACT and MaDCoWS clusters. We use a hierarchical Bayesian model to fit the mass-richness scaling relation, allowing for clusters to be drawn from two populations: one, a Gaussian centered on the mass-richness relation, and the other, a Gaussian centered on zero SZ signal.
Results: We find that MaDCoWS clusters have submillimeter contamination that is consistent with a gray-body spectrum, while the ACT clusters are consistent with no submillimeter emission on average. Additionally, the intrinsic radio intensities of ACT clusters are lower than those of MaDCoWS clusters, even when the ACT clusters are restricted to the same redshift range as the MaDCoWS clusters. We find the best-fit ACT SZ mass versus MaDCoWS richness scaling relation has a slope of p1 = 1.84−0.14+0.15, where the slope is defined as M λ ∝15p1 and λ15 is the richness. We also find that the ACT SZ signals for a significant fraction (∼57%) of the MaDCoWS sample can statistically be described as being drawn from a noise-like distribution, indicating that the candidates are possibly dominated by low-mass and unvirialized systems that are below the mass limit of the ACT sample. Further, we note that a large portion of the optically confirmed ACT clusters located in the same volume of the sky as MaDCoWS are not selected by MaDCoWS, indicating that the MaDCoWS sample is not complete with respect to SZ selection. Finally, we find that the radio loud fraction of MaDCoWS clusters increases with richness, while we find no evidence that the submillimeter emission of the MaDCoWS clusters evolves with richness.
Conclusions: We conclude that the original MaDCoWS selection function is not well defined and, as such, reiterate the MaDCoWS collaboration's recommendation that the sample is suited for probing cluster and galaxy evolution, but not cosmological analyses. We find a best-fit mass-richness relation slope that agrees with the published MaDCoWS preliminary results. Additionally, we find that while the approximate level of infill of the ACT and MaDCoWS cluster SZ signals (1-2%) is subdominant to other sources of uncertainty for current generation experiments, characterizing and removing this bias will be critical for next-generation experiments hoping to constrain cluster masses at the sub-percent level. 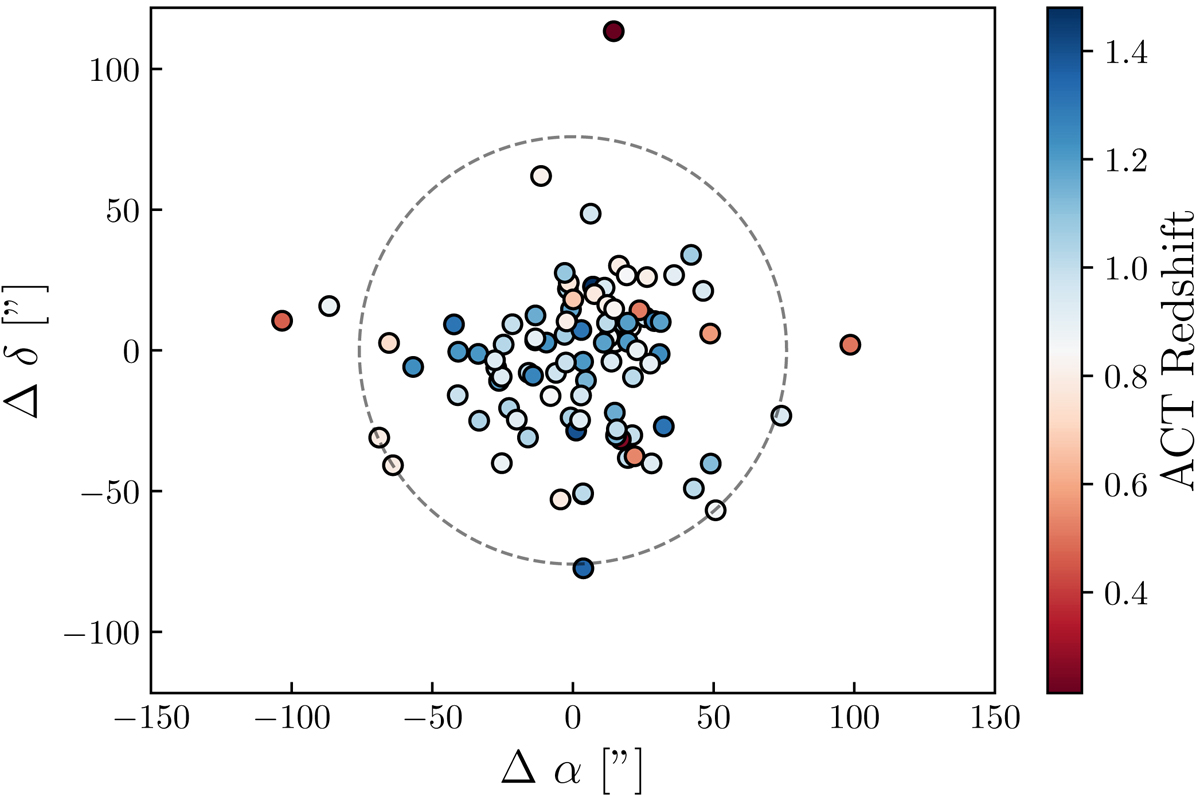