Context. Previous studies show significant north-south asymmetries for various features and indicators of solar activity. These findings suggest some decoupling between the two hemispheres over the solar cycle evolution, which is in agreement with dynamo theories. For the most important solar activity index, the sunspot numbers, so far only limited data are available for the two hemispheres independently.
Aims: The aim of this study is to create a continuous series of daily and monthly hemispheric sunspot numbers (HSNs) from 1874 to 2020, which will be continuously expanded in the future with the HSNs provided by SILSO.
Methods: Based on the available daily measurements of hemispheric sunspot areas from 1874 to 2016 from Greenwich Royal Observatory and National Oceanic and Atmospheric Administration, we derive the relative fractions of the northern and southern activity. These fractions are applied to the international sunspot number (ISN) to derive the HSNs. This method and obtained data are validated against published HSNs for the period 1945-2004 and those provided by SILSO for 1992 to 2016.
Results: We provide a continuous data series and catalogue of daily, monthly mean, and 13-month smoothed monthly mean HSNs for the time range 1874-2020 -fully covering solar cycles 12 to 24- that are consistent with the newly calibrated ISN (Clette et al., 2014). Validation of the reconstructed HSNs against the direct data available since 1945 reveals a high level of consistency, with Pearson correlation coefficients of r = 0.94 (0.97) for the daily (monthly mean) data. The cumulative hemispheric asymmetries for cycles 12-24 give a mean value of 16%, with no obvious pattern in north-south predominance over the cycle evolution. The strongest asymmetry occurs for cycle no. 19, in which the northern hemisphere shows a cumulated predominance of 42%. The phase shift between the peaks of solar activity in the two hemispheres may be up to 28 months, with a mean absolute value over cycles 12-24 of 16.8 months. The phase shifts reveal an overall asymmetry of the northern hemisphere reaching its cycle maximum earlier (in 10 out of 13 cases), with a mean signed phase shift of −7.6 months. Relating the ISN and HSN peak growth rates during the cycle rise phase with the cycle amplitude reveals higher correlations when considering the two hemispheres individually, with r ≈ 0.9.
Conclusions: Our findings provide further evidence that to some degree the solar cycle evolves independently in the two hemispheres, and demonstrate that empirical solar cycle prediction methods can be improved by investigating the solar cycle dynamics in terms of the HSN evolution. 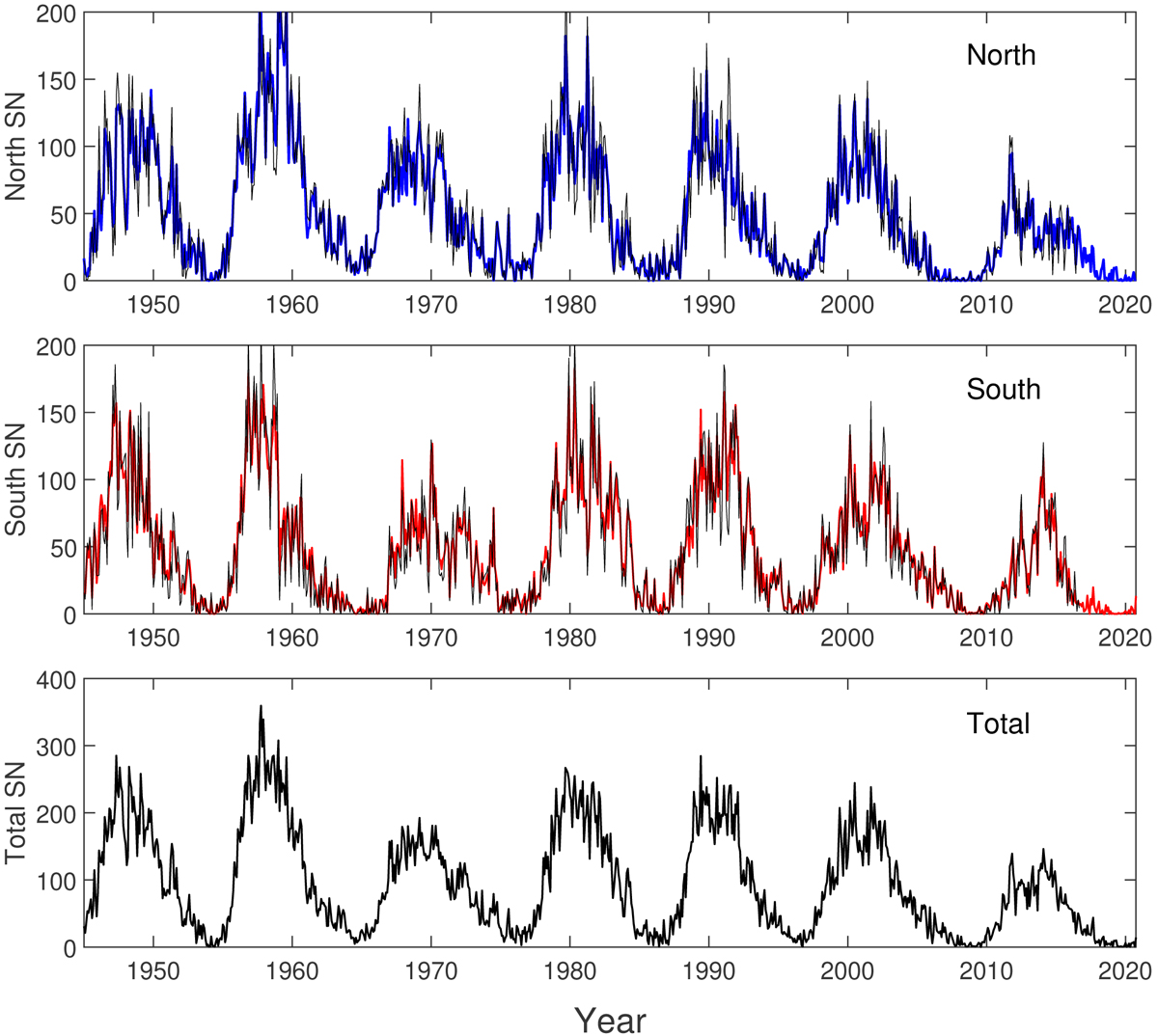