A global view on star formation: The GLOSTAR Galactic plane survey. II. Supernova remnants in the first quadrant of the Milky Way

Context. The properties of the population of Galactic supernova remnants (SNRs) are essential to our understanding of the dynamics of the interstellar medium (ISM) in the Milky Way. However, the completeness of the catalog of Galactic SNRs is expected to be only ~30%, with on order 700 SNRs yet to be detected. Deep interferometric radio continuum surveys of the Galactic plane help in rectifying this apparent deficiency by identifying low surface brightness SNRs and compact SNRs that have not been detected in previous surveys. However, SNRs are routinely confused with H II regions, which can have similar radio morphologies. Radio spectral index, polarization, and emission at mid-infrared (MIR) wavelengths can help distinguish between SNRs and H II regions.
Aims: We aim to identify SNR candidates using continuum images from the Karl G. Jansky Very Large Array GLObal view of the STAR formation in the Milky Way (GLOSTAR) survey.
Methods: GLOSTAR is a C-band (4-8 GHz) radio wavelength survey of the Galactic plane covering 358° ≤ l ≤ 60°, |b|≤ 1°. The continuum images from this survey, which resulted from observations with the most compact configuration of the array, have an angular resolution of 18". We searched for SNRs in these images to identify known SNRs, previously identified SNR candidates, and new SNR candidates. We study these objects in MIR surveys and the GLOSTAR polarization data to classify their emission as thermal or nonthermal.
Results: We identify 157 SNR candidates, of which 80 are new. Polarization measurements provide evidence of nonthermal emission from nine of these candidates. We find that two previously identified candidates are filaments. We also detect emission from 91 of the 94 known SNRs in the survey region. Four of these are reclassified as H II regions following detection in MIR surveys.
Conclusions: The better sensitivity and resolution of the GLOSTAR data have led to the identification of 157 SNR candidates, along with the reclassification of several misidentified objects. We show that the polarization measurements can identify nonthermal emission, despite the diffuse Galactic synchrotron emission. These results underscore the importance of higher resolution and higher sensitivity radio continuum data in identifying and confirming SNRs. 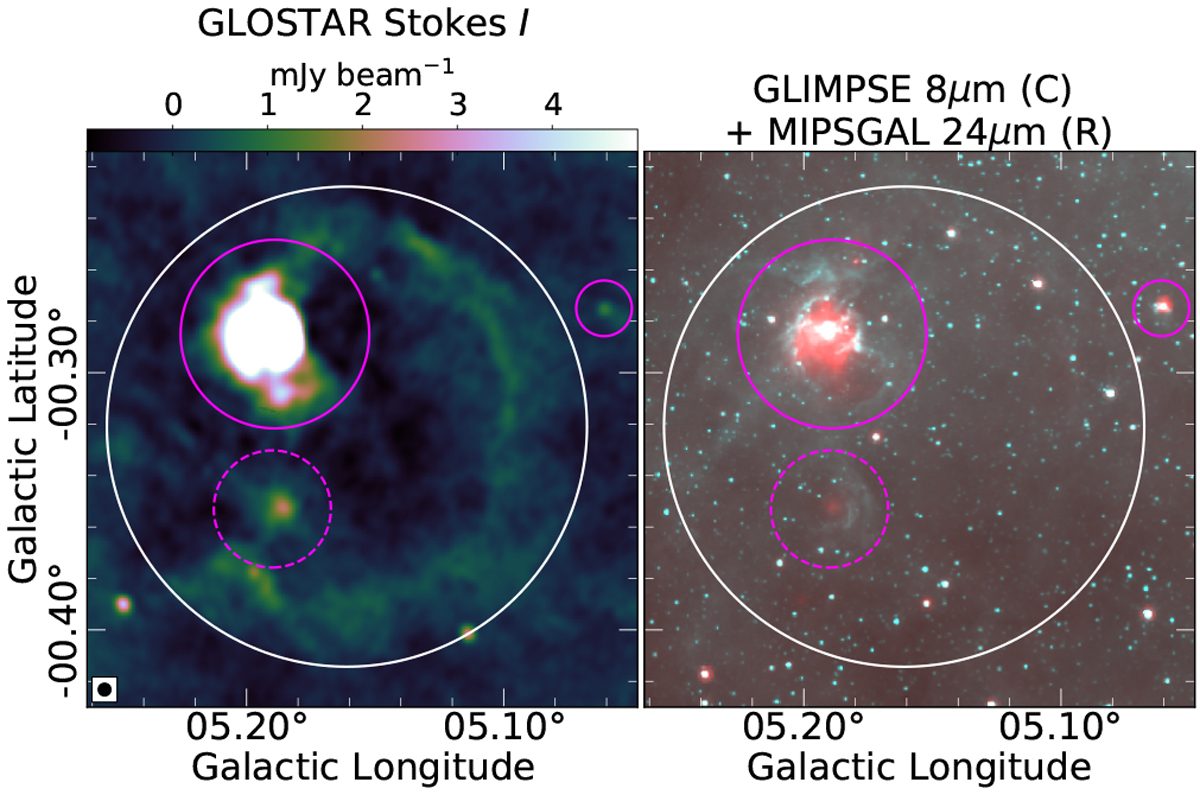