Probing the structure of a massive filament: ArTéMiS 350 and 450 μm mapping of the integral-shaped filament in Orion A

Context. The Orion molecular cloud is the closest region of high-mass star formation. It is an ideal target for investigating the detailed structure of massive star-forming filaments at high resolution and the relevance of the filament paradigm for the earliest stages of intermediate- to high-mass star formation.
Aims: Within the Orion A molecular cloud, the integral-shaped filament (ISF) is a prominent, degree-long structure of dense gas and dust with clear signs of recent and ongoing high-mass star formation. Our aim is to characterise the structure of this massive filament at moderately high angular resolution (8'' or ~0.016 pc) in order to measure the intrinsic width of the main filament, down to scales well below 0.1 pc, which has been identified as the characteristic width of filaments.
Methods: We used the ArTéMiS bolometer camera at APEX to map a ~0.6 × 0.2 deg2 region covering OMC-1, OMC-2, and OMC-3 at 350 and 450 μm. We combined these data with Herschel-SPIRE maps to recover extended emission. The combined Herschel-ArTéMiS maps provide details on the distribution of dense cold material, with a high spatial dynamic range, from our 8'' resolution up to the transverse angular size of the map, ~10-15'. By combining Herschel and ArTéMiS data at 160, 250, 350, and 450 μm, we constructed high-resolution temperature and H2 column density maps. We extracted radial intensity profiles from the column density map in several representative portions of the ISF, which we fitted with Gaussian and Plummer models to derive their intrinsic widths. We also compared the distribution of material traced by ArTéMiS with that seen in the higher-density tracer N2H+(1-0) that was recently observed with the ALMA interferometer.
Results: All the radial profiles that we extracted show a clear deviation from a Gaussian, with evidence for an inner plateau that had not previously been seen clearly using Herschel-only data. We measure intrinsic half-power widths in the range 0.06-0.11 pc. This is significantly larger than the Gaussian widths measured for fibres seen in N2H+, which probably only traces the dense innermost regions of the large-scale filament. These half-power widths are within a factor of two of the value of ~0.1 pc found for a large sample of nearby filaments in various low-mass star-forming regions, which tends to indicate that the physical conditions governing the fragmentation of pre-stellar cores within transcritical or supercritical filaments are the same over a large range of masses per unit length.

The temperature and column density maps are only available at the CDS via anonymous ftp to cdsarc.u-strasbg.fr (ftp://130.79.128.5) or via http://cdsarc.u-strasbg.fr/viz-bin/cat/J/A+A/651/A36 This publication is based on data acquired with the Atacama Pathfinder Experiment (APEX), project 098.F-9304. APEX is a collaboration between the Max-Planck-Institut für Radioastronomie, the European Southern Observatory, and the Onsala Space Observatory. 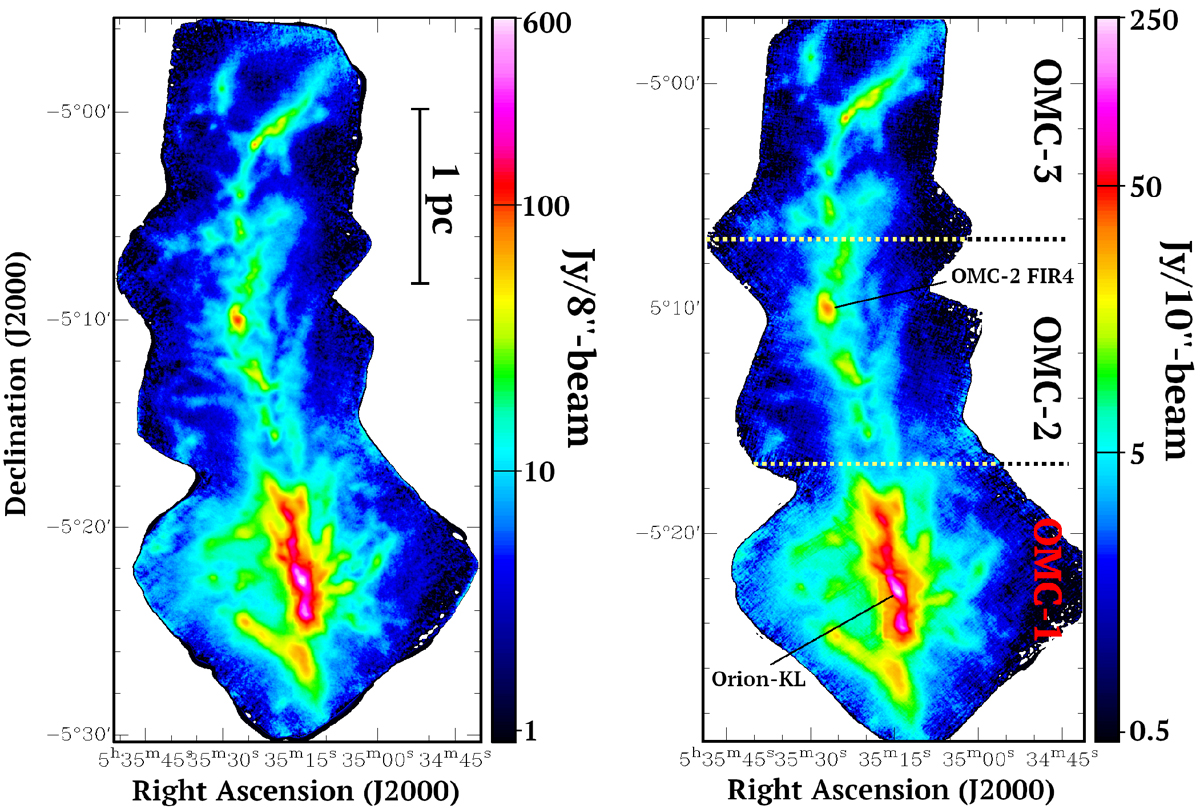