OH mid-infrared emission as a diagnostic of H2O UV photodissociation. I. Model and application to the HH 211 shock

Context. Water is an important molecule in interstellar and circumstellar environments. Previous observations of mid-infrared (IR) rotational lines of OH toward star-forming regions suggest that OH emission may be used to probe the photodissociation of water.
Aims: Our goal is to propose a method to quantify H2O photodissociation and measure the local ultraviolet (UV) flux from observations of mid-IR OH lines.
Methods: Cross sections for the photodissociation of H2O resolving individual electronic, vibrational, and rotational states of the OH fragment are collected. The state distribution of nascent OH following H2O photodissociation is computed for various astrophysically relevant UV radiation fields (e.g., a single Lyα line or a broadband spectrum). These distributions are incorporated in a new molecular excitation code called GROSBETA, which includes radiative pumping, collisional (de)excitation, and prompt emission (i.e., following the production of OH in excited states). The influence of the photodissociation rate of H2O, the spectral shape of the UV radiation field, the density, the temperature of the gas, and the strength of the IR background radiation field on the integrated line intensities are studied in detail. As a test case, our model is compared to Spitzer-IRS observations at the tip of the HH 211 bow-shock.
Results: The OH rotational line intensities in the range 9-16 μm, covering rotational transitions with Nup = 18-45, are proportional to the column density of H2O photodissociated per second by photons in the range 114-143 nm (denoted as ΦB̃) and do not depend on other local properties such as the IR radiation field, the density, or the kinetic temperature. Provided an independent measurement of the column density of water is available, the strength of the local UV radiation field can be deduced with good accuracy, regardless of the exact shape of the UV field. In contrast, OH lines at longer far-IR wavelengths are primarily produced by IR radiative pumping and collisions, depending on the chemical pumping rate defined as 𝒟B̃ = ΦB̃/N(OH) and on the local physical conditions (nH, TK, IR radiation field). Our model successfully reproduces the OH mid-IR lines in the 10-16 μm range observed toward the tip of the HH 211 bow-shock and shows that the jet shock irradiates its surroundings, exposing H2O to a UV photon flux that is about 5 × 103 times larger than the standard interstellar radiation field. We also find that chemical pumping by the reaction H2 + O may supplement the excitation of lines in the range 16-30 μm, suggesting that these lines could also be used to measure the two-body formation rates of OH.
Conclusions: The mid-IR lines of OH constitute a powerful diagnostic for inferring the photodissociation rate of water and thus the UV field that water is exposed to. Future JWST-MIRI observations will be able to map the photodestruction rate of H2O in various dense (nH ≳ 106 cm−3) and irradiated environments and provide robust estimates of the local UV radiation field. 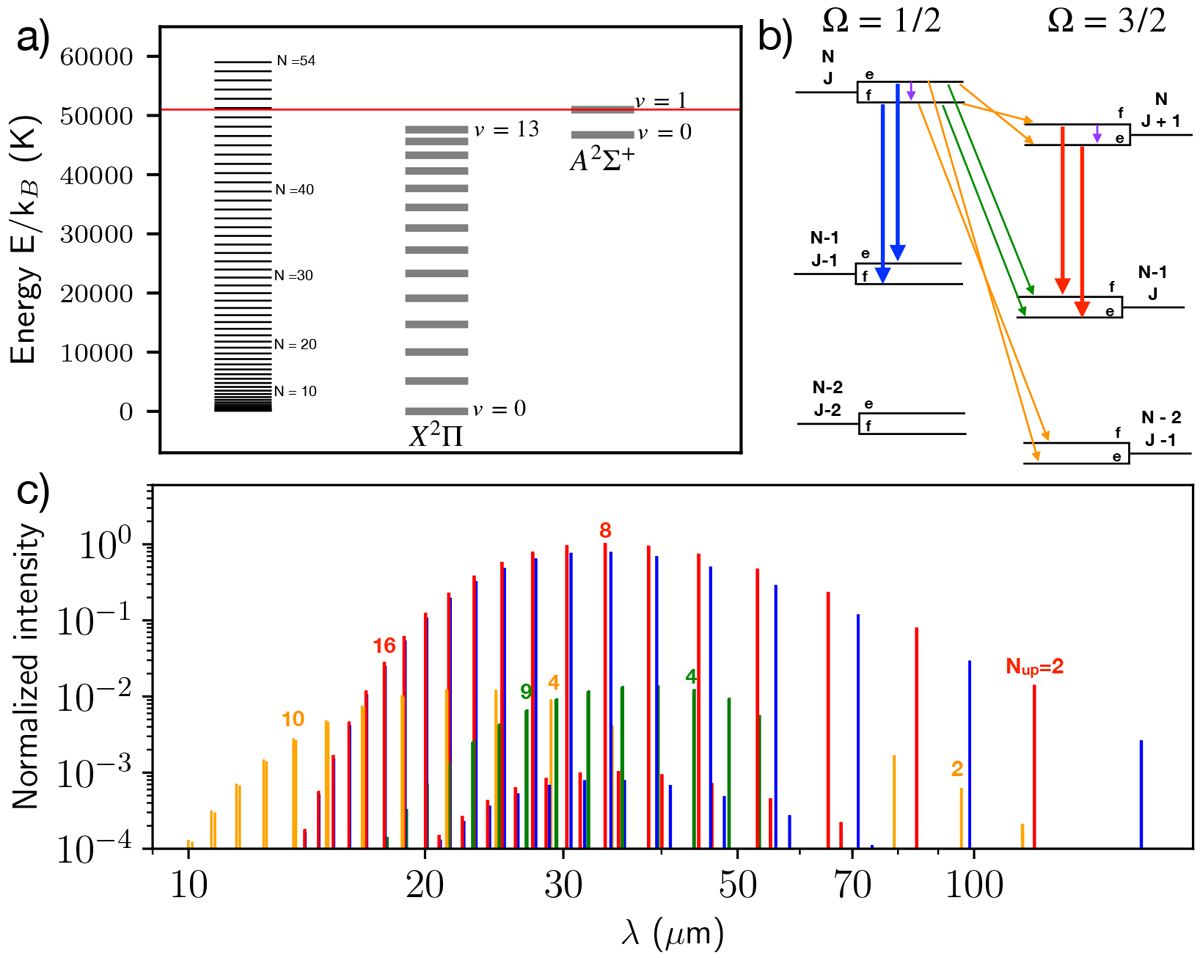