ALMA observations of doubly deuterated water: inheritance of water from the prestellar environment

Context. Establishing the origin of the water D/H ratio in the Solar System is central to our understanding of the chemical trail of water during the star and planet formation process. Recent modeling suggests that comparisons of the D2O/HDO and HDO/H2O ratios are a powerful way to trace the chemical evolution of water and, in particular, determine whether the D/H ratio is inherited from the molecular cloud or established locally.
Aims: We seek to determine the D2O column density and derive the D2O/HDO ratios in the warm region toward the low-mass Class 0 sources B335 and L483. The results are compared with astrochemical models and previous observations to determine their implications for the chemical evolution of water.
Methods: We present ALMA observations of the D2O 11,0-10,1 transition at 316.8 GHz toward B335 and L483 at ≲0.''5 (≲100 au) resolution, probing the inner warm envelope gas. The column densities of D2O, HDO, and H218O are determined by synthetic spectrum modeling and direct Gaussian fitting, under the assumption of a single excitation temperature and similar spatial extent for the three water isotopologs.
Results: D2O is detected toward both sources in the inner warm envelope. The derived D2O/HDO ratio is (1.0 ± 0.2) × 10−2 for L483 and (1.4 ± 0.1) × 10−2 for B335. These values indicate that the D2O/HDO ratio is higher than the HDO/H2O ratios by a factor of ≳2 toward both sources.
Conclusions: The high D2O/HDO ratios are a strong indication of chemical inheritance of water from the prestellar phase down to the inner warm envelope. This implies that the local cloud conditions in the prestellar phase, such as temperatures and timescales, determine the water chemistry at later stages and could provide a source of chemical differentiation in young systems. In addition, the observed D2O/H2O ratios support an observed dichotomy in the deuterium fractionation of water toward isolated and clustered protostars, namely, a higher D/H ratio toward isolated sources. 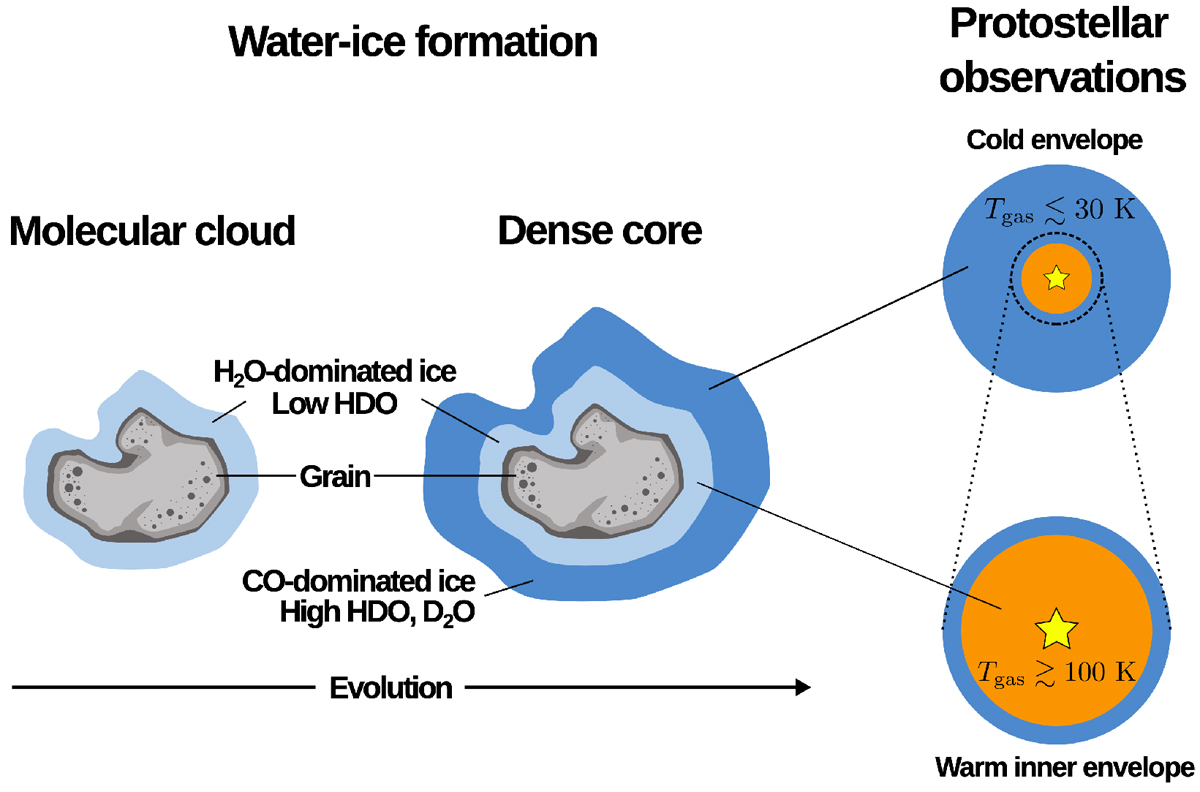