Studying the ISM at ∼10 pc scale in NGC 7793 with MUSE. II. Constraints on the oxygen abundance and ionising radiation escape

Context. Feedback from massive stars affects the interstellar medium (ISM) from the immediate surroundings of the stars (parsec scales) to galactic (kiloparsec) scales. High-spatial resolution studies of H II regions are critical to investigate how this mechanism operates.
Aims: We study the ionised ISM in NGC 7793 with the MUSE instrument at ESO Very Large Telescope (VLT), over a field of view (FoV) of ∼2 kpc2 and at a spatial resolution of ∼10 pc. The aim is to link the physical conditions of the ionised gas (reddening, ionisation status, abundance measurements) within the spatially resolved H II regions to the properties of the stellar populations producing Lyman continuum photons.
Methods: The analysis of the MUSE dataset, which provides a map of the ionised gas and a census of Wolf Rayet stars, is complemented with a sample of young star clusters (YSCs) and O star candidates observed with the Hubble Space Telescope (HST) and of giant molecular clouds traced in CO(2-1) emission with the Atacama Large Millimeter/submillimeter Array (ALMA). We estimated the oxygen abundance using a temperature-independent strong-line method. We determined the observed total amount of ionising photons (Q(H0)) from the extinction corrected Hα luminosity. This estimate was then compared to the expected Q(H0) obtained by summing the contributions of YSCs and massive stars. The ratio of the two values gives an estimate for the escape fraction (fesc) of photons in the region of interest. We used the [S II]/[O III] ratio as a proxy for the optical depth of the gas and classified H II regions into ionisation bounded, or as featuring channels of optically thin gas. We compared the resulting ionisation structure with the computed fesc. We also investigated the dependence of fesc on the age spanned by the stellar population in each region.
Results: We find a median oxygen abundance of 12 + log(O/H) ∼ 8.37, with a scatter of 0.25 dex, which is in agreement with previous estimates for our target. We furthermore observe that the abundance map of H II regions is rich in substructures, surrounding clusters and massive stars, although clear degeneracies with photoionisation are also observed. From the population synthesis analysis, we find that YSCs located in H II regions have a higher probability of being younger and less massive as well as of emitting a higher number of ionising photons than clusters in the rest of the field. Overall, we find fesc,HII = 0.67−0.12+0.08 for the population of H II regions. We also conclude that the sources of ionisation observed within the FoV are more than sufficient to explain the amount of diffuse ionised gas (DIG) observed in this region of the galaxy. We do not observe a systematic trend between the visual appearance of H II regions and fesc, pointing to the effect of 3D geometry in the small sample probed. 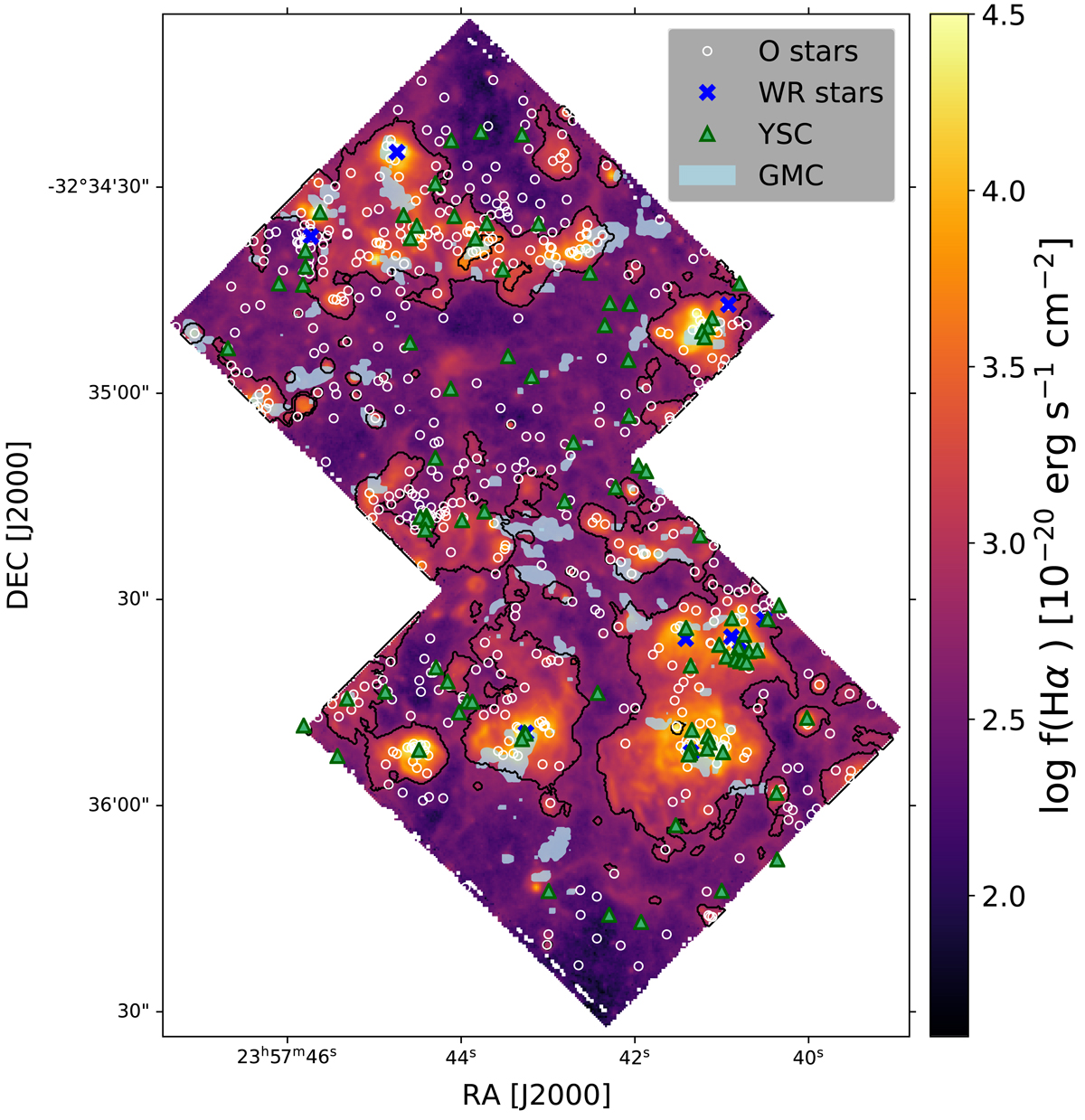