Context. Parker Solar Probe (PSP) is providing an unprecedented view of the Sun's corona as it progressively dips closer into the solar atmosphere with each solar encounter. Each set of observations provides a unique opportunity to test and constrain global models of the solar corona and inner heliosphere and, in turn, use the model results to provide a global context for interpreting such observations.
Aims: In this study, we develop a set of global magnetohydrodynamic (MHD) model solutions of varying degrees of sophistication for PSP's first four encounters and compare the results with in situ measurements from PSP, Stereo-A, and Earth-based spacecraft, with the objective of assessing which models perform better or worse. We also seek to understand whether the so-called `open flux problem', which all global models suffer from, resolves itself at closer distances to the Sun.
Methods: The global structure of the corona and inner heliosphere is calculated using three different MHD models. The first model ("polytropic"), replaced the energy equation as a simple polytropic relationship to compute coronal solutions and relied on an ad hoc method for estimating the boundary conditions necessary to drive the heliospheric model. The second model ("thermodynamic") included a more sophisticated treatment of the energy equation to derive the coronal solution, yet it also relied on a semi-empirical approach to specify the boundary conditions of the heliospheric model. The third model ("WTD") further refines the transport of energy through the corona, by implementing the so-called wave-turbulence-driven approximation. With this model, the heliospheric model was run directly with output from the coronal solutions. All models were primarily driven by the observed photospheric magnetic field using data from Solar Dynamics Observatory's Helioseismic and Magnetic Imager instrument.
Results: Overall, we find that there are substantial differences between the model results, both in terms of the large-scale structure of the inner heliosphere during these time periods, as well as in the inferred timeseries at various spacecraft. The "thermodynamic" model, which represents the "middle ground", in terms of model complexity, appears to reproduce the observations most closely for all four encounters. Our results also contradict an earlier study that had hinted that the open flux problem may disappear nearer the Sun. Instead, our results suggest that this "missing" solar flux is still missing even at 26.9RS, and thus it cannot be explained by interplanetary processes. Finally, the model results were also used to provide a global context for interpreting the localized in situ measurements.
Conclusions: Earlier studies suggested that the more empirically-based polytropic solutions provided the best matches with observations. The results presented here, however, suggest that the thermodynamic approach is now superior. We discuss possible reasons for why this may be the case, but, ultimately, more thorough comparisons and analyses are required. Nevertheless, it is reassuring that a more sophisticated model appears to be able to reproduce observations since it provides a more fundamental glimpse into the physical processes driving the structure we observe. 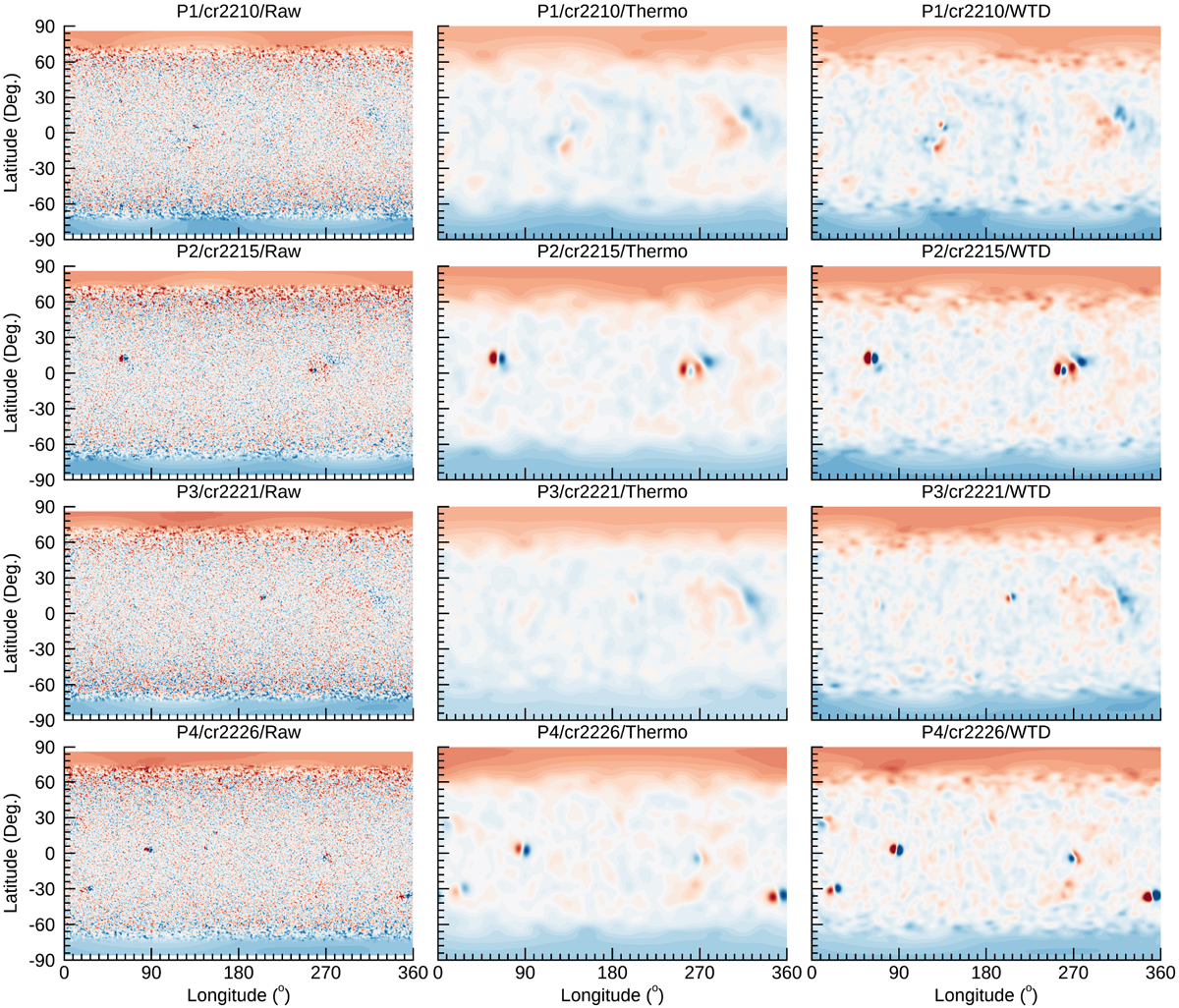